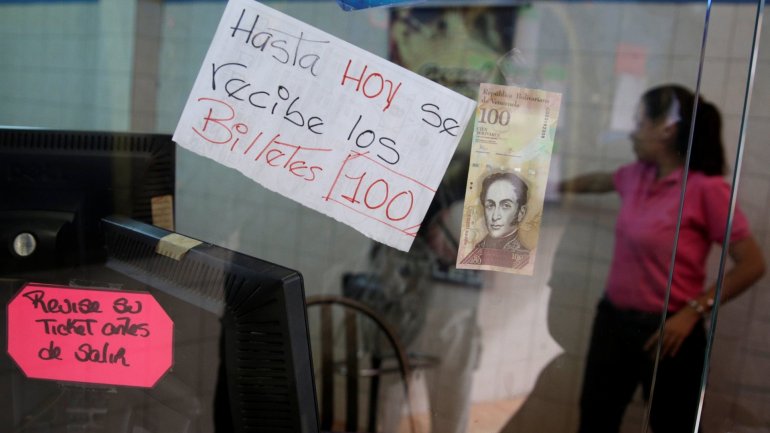 Lining up from dawn with backpacks and plastic bags full of cash, Venezuelans flocked to banks across the country on Tuesday to ditch 100-bolivar bills after President Nicolás Maduro’s surprise move to pull them from circulation.

Soldiers watched as people jostled in lines clutching Venezuela’s largest denomination bill – now worth just three US cents on the streets – which they have to deposit before it becomes officially worthless.

Maduro announced the measure on Sunday, to the consternation of Venezuelans who have become accustomed to stashing large volumes of cash at home as the bolivar’s value has plunged in the crisis-hit Opec nation.

Many businesses stopped receiving them immediately.

Accused by critics of taking a nonsensical and rushed measure, Maduro, 54, justified it as an attempt to outwit international mafias, especially on the Colombian border, hoarding bolivars for contraband.

Displaying images of huge piles of confiscated bills, officials say criminals have tried to sabotage Venezuela’s economy – at the behest of the US Treasury – by siphoning out bolivars to warehouses in Switzerland, Poland, Ukraine, Spain, Germany and the Czech Republic.

Venezuela closed its border with Colombia on Monday, where the government said 117 people had been arrested and 104 million bolivars – $27,000 at the black market rate – confiscated.

The country is undergoing a major crisis: inflation is forecast by local economists for this year at more than 500% and the currency has fallen more than 75% in a year against the dollar – leaving millions skipping meals.

Tuesday’s bank lines were reminiscent of the now-ubiquitous scenes outside shops where food and medicines have grown scarce during Maduro’s more than three-year presidency.

The bills will officially be pulled on Thursday, after which Venezuelans have 10 days to take any left to the central bank.

Many are questioning how the country can collect more than six billion bills in such a short period.

New higher-denomination bills are due to start being released on Thursday.