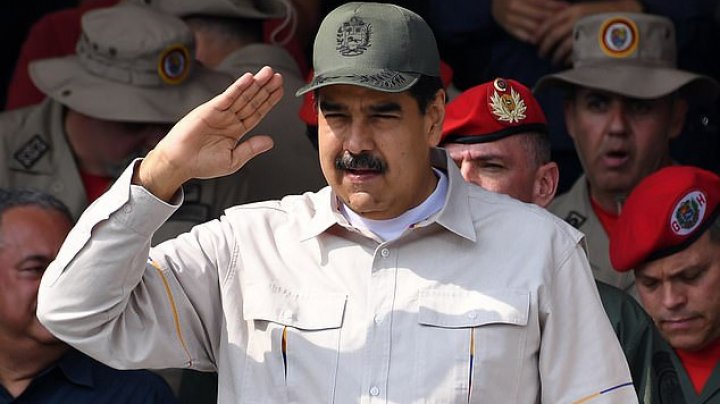 Venezuelan opposition leader Juan Guaidó is considering asking the US to launch a military intervention to oust President Nicolás Maduro.

On Sunday Guaidó said he would 'evaluate all options' after the attempt to topple Maduro failed on Tuesday.

The president responded by delivering an address from an army base in Caracas, flanked by soldiers but five people were killed during subsequent protests.

Guaidó told the BBC he has the support of more than 50 countries and and that US giving its backing to their cause has been 'decisive.'

'I think President [Donald] Trump's position is very firm, which we appreciate, as does the entire world,' he said.

Asked whether he would like Mr Trump and the US military to intervene, he responded it is 'responsible to evaluate' the possibility of international intervention.

He added: 'I as the president in charge of the national parliament, will evaluate all options if necessary.'

The U.S.-backed Guaidó declared himself interim president in January, saying Maduro's re-election last year was rigged and one in a series of increasingly authoritarian steps since he replaced the late Hugo Chávez in 2013 as president.

Venezuela, meanwhile, has been in sharp decline for years, suffering from hyperinflation and shortages of food and medicine that the opposition blames on state corruption and mismanagement by the socialist administration.

Meanwhile, Secretary of State Mike Pompeo said on Sunday that the Trump administration is preparing to use a broad range of options to oust Venezuelan President Nicolás Maduro.

He claimed that the fall of Maduro's government is imminent and that the support for opposition leader Juan Guaidó remains strong.

'We have a full range of options that we're preparing for,' Pompeo said on ABC's This Week.

He explained that potential paths forward include 'diplomatic options, political options, options with our allies and then ultimately a set of options that would involve use of U.S. military.'

'We're preparing those for [Guaidó] so that when the situation arises, we're not flatfooted,' Pompeo said.