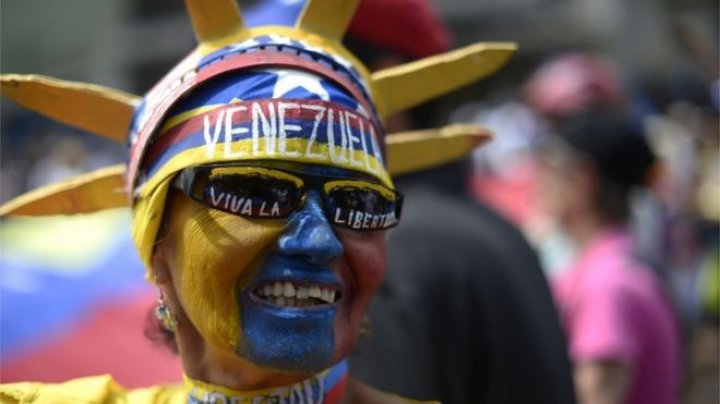 More turmoil is expected in Venezuela a day after opposition leader Juan Guaidó launched a risky effort to enlist the military in toppling President Nicolás Maduro. Here is what we know so far:

●Guaidó called for a massive anti-government demonstration on Wednesday as he attempted to regain momentum after a high-stakes, largely unsuccessful effort to rally the military to his side.

●Maduro appeared triumphant on Wednesday, tweeting that his opponents, including the United States, “will fail” in their efforts to “take our victories from us.” He has announced pro-government demonstrations on Wednesday.

●U.S. officials said they had expected Maduro to flee for Cuba on Tuesday but that Russia persuaded him not to. The Russian government dismissed the allegations as fake news. U.S. officials also said key Venezuelan officials, including the defense minister, had told the opposition they would support Maduro’s removal. They haven’t done so.

●President Trump accused Cuba of conducting military operations in Venezuela and threatened a “full and complete embargo” on the communist-ruled country if it did not “immediately” stop.

Opposition leader Juan Guaidó called on Venezuelans to join a massive anti-government demonstration on Wednesday as he tried to regain momentum the day after a largely unsuccessful effort to rally the military to his side and oust the country’s authoritarian government, writes The Washington Post.

“Let’s carry on with more energy than ever, Venezuela,” he tweeted.

Guaidó and the Trump administration had hoped that this week would mark a turning point in the three-month-long effort to remove leftist President Nicolás Maduro. Guaidó launched what he called the “final phase” of the operation at dawn Tuesday with a surprise appearance with troops outside an air base in Caracas, where he claimed the support of key military units, and called on others to join.

But while the head of Venezuela’s domestic intelligence agency, Maj. Gen. Manuel Ricardo Cristopher Figuera, broke with Maduro, military leaders stayed loyal to him. Guaidó’s appeal appeared to draw only a small number of soldiers to his side.

Now Guaidó faces a heightened risk of arrest, and the possible withering of the most potent anti-government movement to emerge since Maduro took office in 2013. Guaidó, who declared himself president in January, has been recognized as interim president by more than 50 countries, including the United States.

Tuesday’s events also appeared to be a setback for U.S. foreign policy. Secretary of State Mike Pompeo said U.S. officials had expected that the Venezuelan president would flee the country on Tuesday.

Maduro “had an airplane on the tarmac,” Pompeo told CNN on Tuesday evening. “He was ready to leave this morning, as we understand it, and the Russians indicated he should stay” rather than go to Cuba, Pompeo said.

The U.S. government says that Russia and Cuba, staunch allies of Maduro’s, have essentially kept him in power as the economy of this oil-rich country collapses. But the Venezuelan opposition has consistently underestimated Maduro’s ability to maintain territorial control and keep the armed forces on his side.

“They’re not known for deep, multi-layer planning,” said a former senior U.S. official who has been involved in Venezuela policy. He spoke on the condition of anonymity because he continues to consult on Latin American affairs.

“Washington tried its best to demoralize the Venezuelan army and now used fakes as a part of information war,” she told CNN.

National security adviser John Bolton said Tuesday that three senior officials — including the defense minister — had told the opposition they would back his ouster. But they have not broken with Maduro.

President Trump, who has taken a strong personal interest in Venezuela, tweeted late Tuesday that the U.S. government would put a “full and complete embargo” on Cuba if its troops did not immediately end their aid to the Venezuelan government. Cuban soldiers are believed to assist Venezuelan intelligence and the armed forces.

Venezuelans heading to work on Wednesday differed on whether the tepid response to Guaidó’s call Tuesday would dampen support for the opposition.

“If Guaidó is doing it this way, however crazy it may seem, it is because there is a plan behind it. And we have to support it,” said Neidy Graterol, 31, as she exited a Caracas metro station. “He is the only one who has achieved so much in such a short time.”

She said the government was trying to intimidate opposition supporters, with police asking travelers on the metro on Wednesday “where they were going and why.”

Nonetheless, she said, she planned to join the latest anti-government demonstration.

Derwin Castro, a 42-year-old security guard, was considerably more frustrated. He said he initially was excited when Guaidó, surrounded by soldiers, announced at dawn Tuesday that he was working with the military to remove Maduro from power.

“I said to myself, ‘Finally the moment has arrived.’ But later in the afternoon, when I realized they didn’t have all the tanks they talked about, nor the military support, I was disappointed.”

Guaidó’s call for an uprising sparked clashes around the country Tuesday between anti-government demonstrators and security forces. A 25-year-old man died, and dozens of people were injured by rubber bullets, tear gas and live ammunition in clashes, according to local observers and hospital officials. At least 119 people were detained, according to Foro Penal, an organization that tracks political detentions.

Tuesday marked “a pretty decisive conjuncture,” said David Smilde, a Venezuela expert who teaches at Tulane University. If Guaidó winds up being detained, he said, “then all eyes will be on the United States and the international community,” which will have to decide how to respond.

Guaidó, the leader of the National Assembly, invoked the Venezuelan constitution to claim the presidency in January after Maduro declared victory in an election widely viewed as fraudulent. Guaidó has been recognized by the United States and more than 50 other countries as Venezuela’s rightful leader.

Both Guaidó and Maduro hoped to prove the strength of their support with large demonstrations on May 1, internationally celebrated as Workers’ Day.

In a televised address Tuesday night, Maduro promised “a large, millions-strong march of the working class.” He dismissed what he called a “foolish” and “failed” coup that he said was instigated by the United States.

On Wednesday, Maduro tweeted that he was ready to “confront the empire and its cronies who think they can take our victories from us; they will fail.”

Maduro mentioned Guaidó’s name before announcing that prosecutors would investigate “great crimes against the constitution.” He claimed that most of those military personnel who rallied to the opposition’s side on Tuesday quickly returned to their posts.

Yet he also announced a replacement for Figuera, chief of the feared intelligence police known as the SEBIN, a move that suggested cracks in his inner circle.

Earlier Tuesday, Figuera circulated an open letter in which he lamented Venezuela’s sharp decline, saying “it would be irresponsible to blame” only the United States for this.

The oil-rich nation, once South America’s wealthiest, has been paralyzed by the political stalemate and a growing humanitarian crisis. Hyperinflation, rising crime, power outages, and shortages of medical supplies, food and water have reduced life for many to a daily struggle to survive. Millions have fled the country.

The authenticity of the letter was confirmed by a U.S. official who spoke on the condition of anonymity to discuss sensitive information. Figuera appeared to be in hiding, the official said.

Venezuelans have struggled to follow the political struggle convulsing their country, as the government has limited access to media. On Tuesday, the Internet was blocked six times, making it difficult to read updates on social media, most Venezuelans’ main source of information, according to the Institute of Press and Society (IPYS), a nonprofit group tracking freedom of expression.