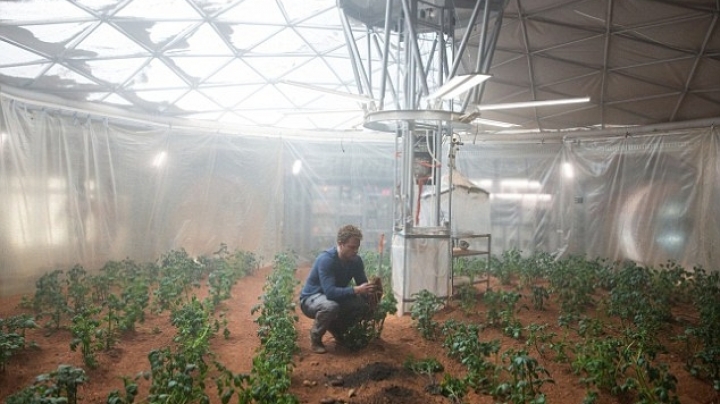 For any astronauts hoping to survive on the surface of Mars, growing crops in the arid soil of the red planet will be an essential.

Now researchers have shown that it is not only possible to grow vegetables in soil similar to that found on Mars, but they are also safe to eat.

Scientists at the Wageningen University in the Netherlands were able to achieve abundant harvests of ten different crops including radishes, peas, tomatoes, cress, rocket and rye, reports Daily Mail.

Tests showed the plants contained 'no dangerous levels' of heavy metals and the researchers declared the results as 'promising'.

It suggests that it may indeed be possible for astronauts hoping to emulate Mark Watney, played by Matt Damon, in the Martain by growing their food on the alien world.

Although the researches did not use actual Martian soil, they used dirt from Earth to create a mix that was as close to that found on the surface of Mars as possible.

Wieger Wamelink, an ecologist at Wageningen University who led the work, said: 'These remarkable results are very promising.

'We can actually eat the radishes, peas, rye and tomatoes, and I am very curious what they will taste like.'

Nasa and other international space agencies are hoping send humans to live on the surface of Mars for long periods by the 2030s.

Similar projects to establish colonies on Mars are being pursued by billionaire Elon Musk and the Dutch company Mars One.

With the huge cost of launching water, food and other essentials needed to support life into space, it is likely settlers will instead need to become self-sufficient on Mars.

Growing crops in the Martian soil is seen as an important step.

In the Martian, stranded astronaut Mark Watney was forced to use human waste to 'seed' the sterile soil on the red planet with bacteria and to fertilise his crops.

Some hope that by taking small samples of soil from Earth it may be possible to enhance this process. However, the soils of Mars are known to contain toxic heavy metals like lead, arsenic and mercury.

Earlier this year Dr Wamelink and his colleagues announced that they had been able to grow 10 different vegetable and cereal crops.

Using soils designed to mimic those on Mars, they added fresh cut grass and manure before giving the plants ample water.

The plants were cultivated in a glass house under constant temperature, humidity and light conditions and under earth atmosphere.

'This is because we expect that first crop growth on Mars and moon will take place in underground rooms to protect the plants from the hostile environment including cosmic radiation,' said Dr Wamelink.

Spinach was the one crop they struggled to grow.

However, there was great uncertainly about whether the plants would absorb the high levels of heavy metals.

Now testing has shown that they do not seem to have taken up the toxic elements while growing.

Dr Wamelink said his team were now testing whether it is possible to grow potatoes and beans.

He said: 'It's important to test as many crops as possible, to make sure that settlers on Mars have access to a broad variety of different food sources.'

He added that they are hoping to have a 'Martian Meal' in the coming months that will be made with the harvested crops.