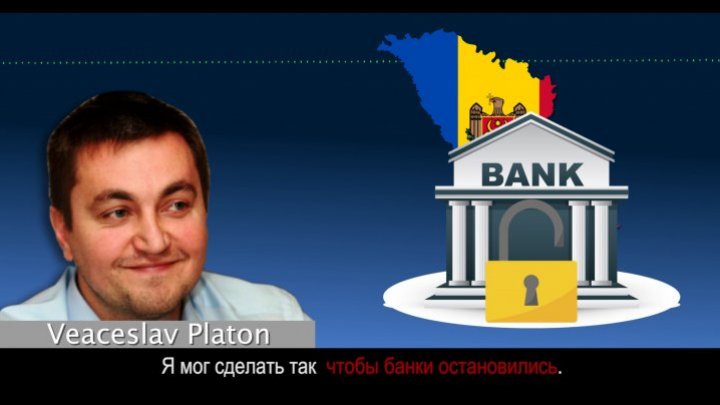 Away from cameras and voice recorders and in the comfort of his privacy with his lawyers, Veceaslav Platon took his mask off and confirmed, word by word, the truthfulness of Milliardomat, Moldovan Laundromat investigation, made by the journalists from zeppelin.md.

The audio record which was published, was sent by one of his lawyers together with the request to keep his own name in confidentiality, because of safety reasons and the state law restrictions regarding the professional secret.

The audio record actually is a self-denunciation of Veceaslav Platon, which is forcing the Law Institution from Chisinau to retrain his acts according to composition of the crime as an attack to economical security, impairment of a State security and betrayal of the State.

The examination of the audio record, which seems to be recorded during a meeting of Veaceslav Platon with his lawyers, confirmed that the recording is authentic without mounting interference, and the voice appearing in it belongs to Veaceslav Platon.

Without any remorse or regret, even with a tone of a pride in his voice, Platon revealed his deeds to his lawyers, as well as the consequences for the Republic of Moldova. He appears to be very conscious about the aim pursued by the attacks coordinated by him in the Moldovan banking system, as an element of the Russian Laundromat and describing with a cold blood his desired effects, the crash of the economical system and, ultimately, "putting the country on knees".

Is to be noted that recently the journalist of the investigation, who deconspired the Russian Laundromat in the international press, Roman Anin, confirmed the conclusions of the investigation made by zeppelin.md, which were published in June. The journalist confirms that "the theft of the century" in the Moldovan banking system is an element of the Russian Laundromat.
"Platon says that the Banks were about to be closed and all the ATM's blocked. In consequence, it should have meaning of the insolvency not only of the banking system, but the paralysis of the budget, socio-economical and political of the whole country as well. The retirement pays, as well as other social payments and wages for the public sector workers would have been blocked.
As a result, the private businesses accounts shouldn't been able to get their bank services in the banks from Moldova, so any kind of an economical activities could be stopped even the wages payments in the private sector. Any kind of an external economical transaction should have been stopped, respectively the imports of the large scale of goods.
In consequence, the devaluation of the national currency just in a few weeks, symmetrical inflation for hundreds of percentages and the disappearance of the first necessity aliments in shops, these could have been some of the elements of a disaster that could became reality for Republic of Moldova.
It should have happend immediatly after the Vilnius Summit and the association of the Republic of Moldova to European Union, right before the parliamentary elections from 30 November 2014. It Is clear who has to profit from all of the Veceaslav Platon attacks, Kremlin, which have never hide his irritation regarding the ideea of association of Ukraine and Republic of Moldova together with Transnistria to European Union.
In Ukraine, the Russians fury came in 2014 with the annexation of Crimeea and with an war on Donbass. I RM the Russian intervention took the form of an hybrid war, and the principal target was the national banking system. The operation was very good prepared by Kremlin and russian special services such as FSB, KGB and GRU. Veceaslav Platon being recruited by KGB since 1991 obtained the role of the coordinator for this operation.
Having the control on MoldIndConBank since 1994, he started to monopolize UniversalBank, MoldovaAgroindBank, VictoriaBank and 1/3 of shares from Bank of Economies, which was under the State control. Through all this Banks he used to wash russian money and to draw out hundreds of millions of dollars  out of moldovan banking system.
In parallel, through ASITO and Victoria Asigurări, Veaceslav Platon also controled 90% of the Moldovan insurance market.

In 2013, Veaceslav Platon includes another pioneer of Russian special services,under the control of the FSB, infiltrated into the entourage of Prime Minister Vlad Filat, Ilan Shor. Ilan Shor took over control the last untouched Moldovan banks, the Social Bank and UniBank. After receiving Platon's shares from Bank of Economies, he took control of BEM, which pass from subordination of the Chisinau government under the control of VneshEkonomBank in Moscow.

Thus, since August 2013, the special Russian services controlled more than 90% of the banking system of the Republic of Moldova. Everything was ready for the detonation of the Moldovan banking system and destabilization of the country, an operation described by Veaceslav Platon in the audio record.
Detonation of the banking system of the Republic of Moldova and respectively the socio-econimical destabilizationwere going to be politically capitalized by pro-russian polical parties, which also were under the control of Kremlin and russian special services. Russian special services have prepared 2 plans for this operatin, plan A and B.
According to plan A, people which respond about PR from Moscow and propagandists from Chisinau had to accuse pro-West politicians in the organization of the socio-economical disaster, thus exploiting the protest vote in the parliamentary elections from 30 November 2014 and redirectioning electors to redirectioning electors sympathy to politicians and pro-russian parties.
Taking advantages from a huge founding from Krapivin Group, coordonated by the KGB General, Vladimir Yakunin, the principal gainer of  the washed money through Russian Laundromat. The russophile party of Renato Usatii, controled by FSB, having an spectaculous raiting raising at the moment because of the russian PR, the elections results could became a core for a new majority in parliament.
At the Renato Usatii's core have to accide Igor Dodon's  Party of Socialists, also controled by Kremlin and generously founded by Ilan Shor, and the communist deputies from PCRM as well, in this way creating a pro-russian gouvernment with a comfortable majority in parliament.
Aa a result, the new alliance have to denounce the association agreement of RM with EU, and to refocus Chisinau on Belarus-Russia Customs Union so that Moldova could be influeced by Moscow and further.
By eliminating from the elections the Renato Usatii's party, the whole plan A was discredited, so that russian applied plan B, which in fact consisted from what happend on 7 of April 2009, the peacefull anticomunists protests wich turned into street disorders.
After detonating the banking system, people in retirement and  state employees  left without recieving payments, social payments and sallaries, students without scholarships, and all others who had to suffer, should have join the protests, so that the russians could refocus citizens against the europen integration.
The detonation didn't succeed, as Platon confirmed it in the audio record. Right bvefore the elections of 30 Novemnber 2014, Bank of Economies returned under the State control due to Supreme Court of Justice decision, and BNM initialized a special administration of BEM, Unibank and Social Bank, retrieving the management of banks which were diverted by Ilan Shor.
At the moment Ilan Shor was captured, he betrayed the russian special services and sniffed all the scheme to authorities from Chisinau. As a response, at 15 January 2015 Renato Usatii announced that Ilan Shor recieved an interdiction to entry on the territory of the Russian Federation, this fact was later officially confirmed by the Moscow authorities.
Subsequent, in June of 2015, Veceaslav Platon get a grace hit, and overturn the whole russian operation, BNM introduced a special administration at VictoriaBank, which was taken at that time from Veceaslav Platon by Serguey Lobanov, the KGB General's son-in-law, Andrei Belianinov, as well as MoldIndConBank and Moldova AgroIndBank. Thats how Russia lost the control on banking system of Moldova.
the failure of Platon's operation brings a big scandal at Moscow and with an accounts adjustment at FSB groups, which participated in that operation. In August 2015, General Vladimir Yakunin resigns, and not long after the Director of Economical Security Serviceof FSB resigns too.
In June 2016, FSB operated searches in offices and at Andrei Belianinov and Serguey Lobanov homeplace, where are found bags and boxes filled with money, as a result Andrei Belianinov resigns from his job position.
Simultaneously, in february 2014, General Prosecutor's Office in Chisinau opened the criminal file regarding Russian Laundromat and the Platon's operation failure has led to the unprecedented cooling of relations between Chisinau and Moscow, which degenerated into a diplomatic war, accusations in spying, expulsions of Russian diplomats and even Russian Deputy Prime Minister, Dmitri Rogozin.
Russia hasn't renounced on Plan B, even if for now the Kremlin scenario was thwarted. The protests during 2015-2016 in Chisinau, funded by Veaceslav Platon, culminated at 20 January 2016 with a new assault attempt on the Parliament building, after April 7, 2009, but this time the attempt failed.

However, the protests regarding the direct election of the president by the people, directed and financed by the Russian special services, culminates on 13 November 2016 with the victory in the presidential election of pro-Russian Igor Dodon, sympathetic to the Kremlin. It happened against the background of the effects and of the attack on the banking system during the 2010-2014 and was left with serious damages in the period 2015-2016, due to currency loss from the reserves of BNM, allocated for salvage of citizens deposits and depreciation of the bad social impact.

Even if the agent Veaceslav Platon failed to complete the plan and to put the Moldovans on their knees, and was detained on 25 July 2016 in Kiev by the Security Service of Ukraine, FSB, SVR and GRU didn't give up.