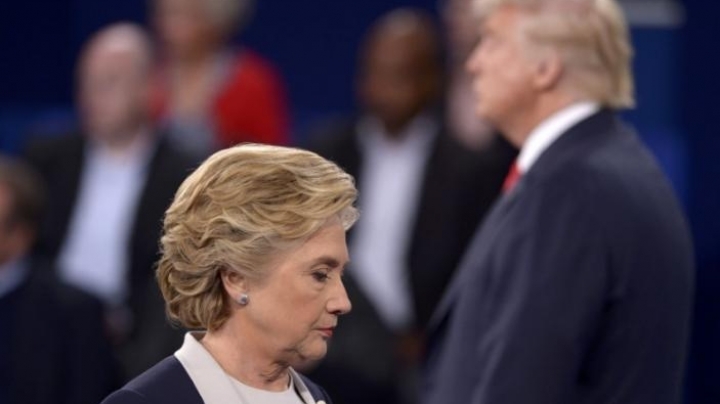 A defiant Donald Trump on Sunday said Hillary Clinton would go to jail if he were president and attacked her husband for his treatment of women in a vicious presidential debate less than a month before the U.S. election, reports Reuters.

Their debate, the second of three before the Nov. 8 vote, was remarkable for the brutal nature of the exchanges between Trump, the Republican presidential nominee, and Clinton, his Democratic rival.

He called her a "devil" who repeatedly lies, someone with tremendous hate in her heart. She called him an abuser of women.

There was a palpable sense of mutual contempt as they stood on stage, refusing to shake hands at the start. Moderators Anderson Cooper of CNN and Martha Raddatz of ABC both seemed at points to be grimly watching two trains collide.

Through it all, Trump, 70, and Clinton, 68, both landed punches as they clashed over taxes, healthcare, U.S. policy in the Syria civil war and Clinton's comments that half of Trump's supporters belonged in a "basket of deplorables."

A newly uncovered 2005 video of him making vulgar remarks about women prompted a stampede of Republican politicians to abandon him, deepened fissures with establishment party figures, and seemed to many in the party to put his already uphill battle to win the White House even farther out of reach.

A CNN/ORC snap poll of debate watchers found that 57 percent thought Clinton won the encounter, versus 34 percent for Trump.

Even after the debate, party leaders remained concerned that Trump had not shown enough contrition over the sexually aggressive remarks to win over independents and women voters who could decide the election.

He again described the comments as "locker-room talk" and said he had never kissed or groped women without their permission, despite having bragged about doing so on the video which emerged on Friday.

President Bill Clinton had done worse to women, Trump said in one of several forceful attacks that may reinforce his popularity with his core supporters who detest the Democratic nominee.

Hillary Clinton responded that Trump's comments showed he was unfit for the White House.

She accused Trump of dodging a discussion of policy issues to avoid talking about his campaign because of “the way yours is exploding and Republicans are leaving you."

Early in the 90-minute debate, Trump said he would appoint a special prosecutor to look into Clinton's operation of a private email server during her tenure as President Barack Obama's secretary of state from 2009-2013.

Clinton said, "You know it’s just awfully good that someone with the temperament of Donald Trump is not in charge of the law in this country.” Trump shot back: “Because you’d be in jail.”

A nearly year-long FBI investigation into the emails concluded earlier this year without charges being filed, although FBI Director James Comey said Clinton had been careless in her handling of sensitive material.