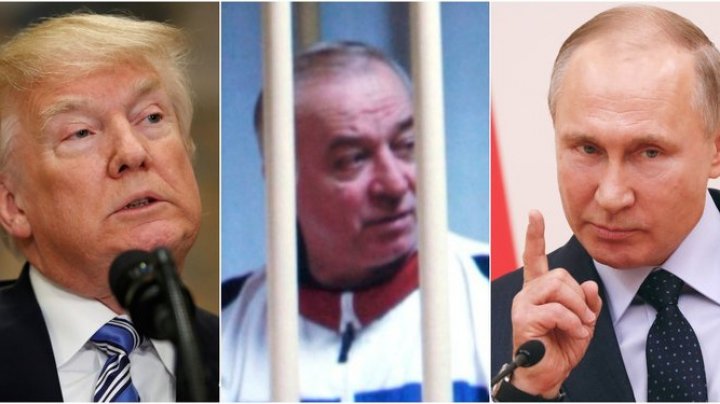 The US has ordered the expulsion of 60 Russian officials, including a dozen based at the United Nations, who Washington says are spies, in response to the nerve agent attack in the UK.

The Russian consulate in Seattle is also being closed as part of a package of punitive measures. A senior official said that the consultant closure and the expulsions were be carried out “in solidarity with our closest allies” in reaction to what he said was “a reckless attempt by the [Russian] government to murder a British citizen and his daughter with a military grade nerve agent.”

But a second official said the measures were also intended as a response to a “steady drumbeat of destabilising and aggressive actions” by Moscow against the US and its allies.

The officials being expelled include 48 in the Russian embassy in Washington and 12 at the Russian mission at the UN, who the US say are spies, engaged in “aggressive collection here in the US”. They said that the spies at the UN were abusing their residence privileges under the UN headquarters agreement. They said that there over 100 Russian spies in the US currently and the expulsions would significantly reduce Russian espionage capabilities in the US. The expelled Russians have seven days to leave the country.

The White House had initially been cautious in its response, refusing to blame the Kremlin. Senior officials said the nature of the Russian response to UK allegations held lead to the definitive US conclusion that the Kremlin was responsible.

“Russia has had nearly a month to respond but instead of explaining has engaged in the usual obfuscation we have seen in the past,” a US official said.

Russia promised it would take reciprocal action against Washington. It said the UK had not presented a single fact proving that Moscow was behind the poisoning of Sergei Skripal and his daughter, Yulia.

The foreign ministries of three Baltic states - Lithuania, Estonia and Latvia - and Poland earlier summoned their Russian ambassadors to meetings that are expected to kickstart a round of expulsions of Russian diplomats across Europe.

EU heads of state concluded last week that it was highly likely the Russian state was responsible for the attack.

The first news of the meetings came from Russian sources, and the UK will be expecting that a coordinated round of expulsions extends beyond four of its closest allies in the EU. The UK expelled 23 Russian diplomats in the wake of the poisoning, and Russia responded by ejecting the same number of British diplomats.

The UK won unexpectedly strong diplomatic support at the meeting of the EU heads of state last week, but the test now is whether EU states take practical steps to register their disapproval directly to Putin. The EU is also looking at coordinated steps to rein back Russian hybrid warfare.

The French president, Emmanuel Macron, has already said he will take action, and Ireland has said it will make a security assessment of Russian diplomats stationed in Dublin. But a number of other countries with strong ties to Russia, notably Austria, Bulgaria, Greece, Italy, Hungary and Spain, are reluctant to do anything practical.

Angela Merkel, the German chancellor, is expected to win the support of her newly formed coalition government to take practical action, even though over the weekend many prominent German politicians called for a rapprochement with Russia, including a suggestion that Putin be invited back to summits of the G7. Russia was expelled from the premier assembly of western economies following the annexation of Crimea in 2014, but still attends the G20.

The divisions within the EU were highlighted by a split at the top of the EU bureaucracy. The EU council president, Donald Tusk, said he was in no mood to congratulate Putin on his re-election as Russian president, but the commission president, Jean-Claude Juncker, sent Putin a note of strong congratulations.

The EU called its ambassador to Moscow for consultations over the weekend.

The UK defence secretary, Gavin Williamson, visiting British troops in Estonia, said the backing for Britain was in “itself a defeat for President Putin”.

Theresa May will report back to MPs on Monday on her efforts to garner international support for an uncompromising approach to Russia. On Wednesday, the House of Commons foreign affairs select committee will hold a special evidence session designed to consider what further steps the government could take to restrict the movement of Putin-linked Russian money in London.

In an attempt to stave off diplomatic expulsions in the US, the Russian embassy in Washington urged the Americans to rein in Downing Street. “In these days, a younger partner needs inspiration and help from over the ocean based on wise restraint,” the embassy said.