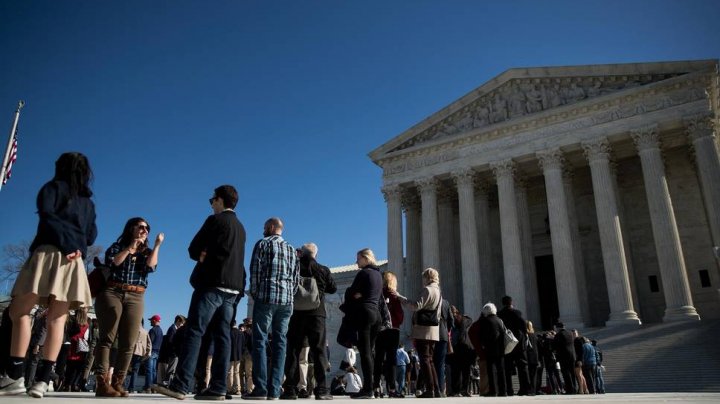 foto: The US Supreme Court sided with a Christian baker who objected to making a cake for a gay couple ( Getty Images )
AFLĂ imediat Știrile Publika.MD. Intră pe Telegram

The Supreme Court has ruled in favour of a Colorado baker who refused to make a cake for a same sex wedding because of a religious objection, writes Independent.

The Monday decision found that the Colorado Civil Rights Commission (CCRC) showed hostility towards the baker and their religious beliefs, violating religious protection laws in the US.

The 7-2 decision presented a win for the baker, Jack Phillips, but did not address the broader constitutional questions that the case brought forward.

The case stems from a 2012 incident when Masterpiece Cakeshop refused to make a wedding cake for the same sex couple, but offered to sell them other baked goods like birthday cakes. Following the rejection, the couple approached the CCRC claiming that they were wrongfully discriminated against because of their sexual orientation. Same sex marriage was not recognised by the state of Colorado at the time.

In writing his majority opinion for the court, Justice Anthony Kennedy noted the peculiar nature of the cause, where "free speech" is defined in the context of expression through the creation of a customised cake for a ceremony that the baker strongly disagreed with on religious grounds.

"The freedoms asserted here are both the freedom of speech and the free exercise of religion. The free speech aspect of this case is difficult, for few persons who have seen a beautiful wedding cake might have thought of its creation as an exercise of protected speech," Mr Kennedy wrote. "This is an instructive example, however, of the proposition that the application of constitutional freedoms in new contexts can deepen our understanding of their meaning."

The ruling relies heavily on the actions of commissioners on the CCRC after the couple filed a complaint against Masterpiece Cakeshop. Those commissioners, according to the Monday ruling, "disparaged Phillips’ faith as despicable and characterised it as merely rhetorical, and compared his invocation of his sincerely held religious beliefs to defences of slavery and the Holocaust". In addition, the court noted, the commission determined that any message on the cake would be attributable to the customer of the cake — not the baker — even though the CCRC had ruled the opposite way previously when tasked with determining potential discrimination over objections to anti-gay messaging.

“The neutral and respectful consideration to which Phillips was entitled was compromised here,” Mr Kennedy wrote. “The Civil Rights Commission’s treatment of his case has some elements of a clear and impermissible hostility toward the sincere religious beliefs that motivated his objection.”

David Mullins and Charlie Craig approached Masterpiece Cakeshop in 2012, and asked the business to make a cake for their upcoming wedding, which they planned to have in Massachusetts. Mr Phillips then refused to serve them, saying that he would not use his baking talents to create a message supporting same sex marriage that runs counter to his religious beliefs on the subject.

Mr Mullins and Mr Craig argued at the time that they were humiliated by the rejection, and took their complaint to the CCRC. That commission ruled in their favour, as did the Colorado court of appeals, which found that Mr Phillips' right to free speech had not been violated.

Gay rights organisations have argued that gay couples should have access to the same services provided to the general public, and that a ruling in favour of Maserpiece Cakeshop would undermine the landmark 2015 Supreme Court decision that made same sex marriage the law of the land.

Meanwhile, Religious groups have argued that forcing those with deeply held religious beliefs against same sex marriage is akin to forcing individuals to speak — which the Supreme Court has long held is a violation of First Amendment rights.

In response to the Monday ruling, the American Civil Liberties Union, which argued the case on behalf of Mr Mullins and Mr Craig, said that the courts had actually reaffirmed their core belief that people should have equal access to services provided to the public, even though the court had reversed the decision in this particular case.

“The court reversed the Masterpiece Cakeshop decision based on concerns unique to the case but reaffirmed its longstanding rule that states can prevent the harms of discrimination in the marketplace, including against LGBT people," Louise Melling, the deputy legal director of the ACLU, said in a statement