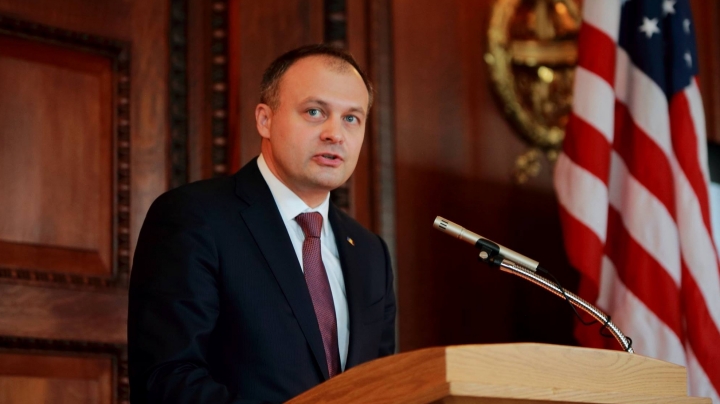 Those 25 years of Moldova's independence were marked by many challenges and overcoming them took time and effort. Now our country has a well-defined objective, the European integration. The statement was made by chairman of the Parliament, Andrian Candu during a reception in Washington.

Head of parliament delivered his speech in English.

US officials present at the reception at Washington appreciated the Moldovan government's efforts to implement reforms aimed at bringing prosperity to our country.

"US supports the progress of Moldova. During the 25 years of independence, Moldova has made efforts to become a more prosperous and democratic country. And that's just for the citizens" ,  said Deputy Assistant Secretary of State, Bridget Brink .

"Moldova has worked hard in recent years to be a democratic and prosperous so that its residents feel safe. Our top priority is for this country to have a bright future without being influenced or intimidated from the outside" , said deputy assistant Secretary of State Michael Carpenter.

Present at the event, former US Ambassador to Moldova, Pamela Smith has sent a congratulatory message to our citizens, spoken in Romanian.

"Most Americans who visited Moldova, fell in love with this country. I will never forget the time spent there. On the occasion of Independence Day wish people modovenesc success, prosperity, health and happiness. Thank you very much," said former US ambassador Moldova, Pamela Smith.

Speaker Andrian Candu, conduct a working visit to the US in the period September 28th to October 5th 2016. The head of the Moldovan parliament has scheduled meetings with senior US officials and development partners.

He discusses developments in Moldova and in the region and the country's European agenda, implementation of the Association Agreement and fostering the Moldovan-American relations.