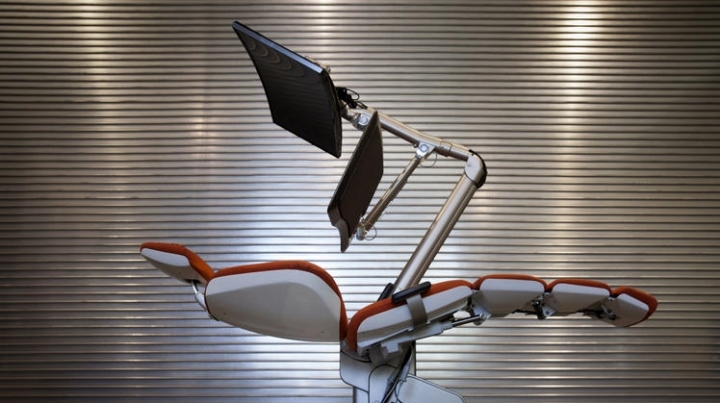 Che Voigt believes his company has solved problems that have plagued the working world since the advent of typing.

It’s a solution to hunched backs, stiff necks and tight shoulders. It’s a workstation that, with a push of a button, transitions from a standing desk to a seated table to a fully reclined platform like a dentist’s chair.

Its seat expands and retracts, supporting the whole body from head to heels. Its desk moves up, down and rotates. There’s a screen and mouse and keyboard that follows the user’s eyes and hands.

It’s the way of the future, he says; the most comfortable you can possible be working at a computer. And it starts at $5,900.

Before anyone scoffs, Voigt has a defense: 1) Don’t knock it until you’ve tried it, and 2) If people don’t invest in ergonomics now, they’ll pay for it later.

And if Silicon Valley’s track record is anything to go by, Voigt might be onto something. Tech firms have long embraced wacky inventions that promise heightened productivity and creativity — and the industry has a history of making them mainstream.