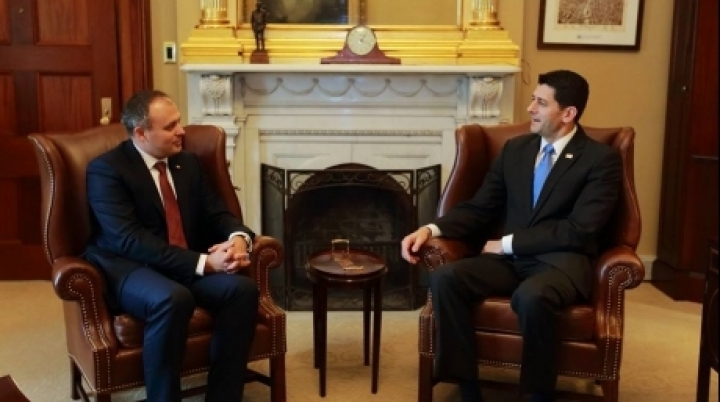 The cooperation of the Moldovan and U.S. Legislatures, the development in Moldova and in its area, the European integration agenda and the reforms, the cooperation with the IMF and international donors and the ways of strengthening the Moldo-American dialogue were tackled by Parliament President Andrian Candu and House speaker Paul Ryan.

Andrian Candu has reiterated the Chișinău Parliament majority is determined in supporting the Cabinet assuming and carrying out reforms, fighting high-scale corruption, creating a business-friendly environment and bettering the investment climate.

Andrian Candu has mentioned the intention to create a joint committee for strategic dialogue "ProAmerica".

He has underlined the Chișinău government is willing to deepen the relations and to strengthen trans-Atlantic partnership in politics, economy and social sphere.

The Moldovan speaker has mentioned he counts on Paul Ryan’s personal support in resuming the works of the intergovernmental Moldo-American economic cooperation committee, which will contribute to step up the commercial-economic cooperation.

Andrian Candu has expressed his hope that, after the partial elections for the U.S. Congress, the continuity of Moldova’s friends group in the U.S. “Congressional Moldova Caucus” will be insured. According to the Moldovan speaker, strengthening the activity of this group has an important contribution in promoting the bilateral relations.

Paul Ryan has shown interest for the internal developments in terms of security in Moldova, the Transnistrian settlements and the contribution of Germany’s OSCE chairmanship.

The U.S. official has reiterated his support for Chișinău’s efforts in building a state of law, by implementing key reforms.

The House speaker has accepted Andrian Candu’s invitation to pay a visit to Moldova and the region.