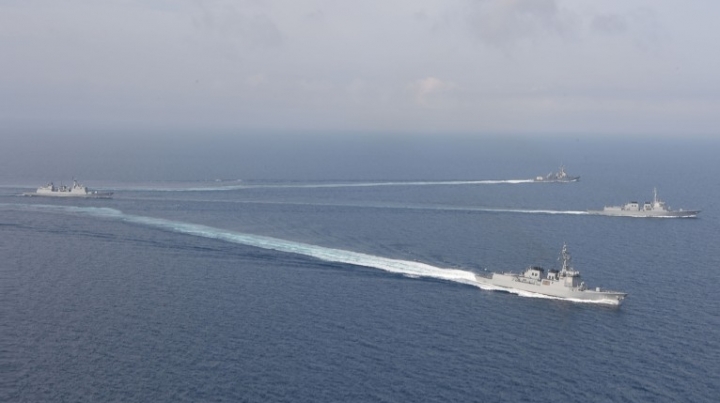 The US and South Korean navies put on a show of force in the Sea of Japan on Monday, the latest in a string of displays of military might in response to North Korea's testing of nuclear warheads and ballistic missiles, reports CNN.

It was the first time U.S. and South Korean vessels have operated together in waters so close to the east coast of North Korea, a US Navy official said. The ships were armed with long-range, precision, land-attack cruise missiles, the official said.

The naval show of force followed last week's flight of US Air Force B-1 bombers along the Demilitarized Zone, the closest the powerful, combat-tested heavy bombers have ever flown to the line separating North and South Korea, according to a U.S. military source.

That flyover followed North Korea's announcement of what it claimed was a successful test of rocket engine.

Earlier this month, B-1s flew over Osan Air Base, south of the South Korean capital of Seoul, in response to North Korea's fifth test of a nuclear warhead, a test Pyongyang said showed it's ready to mount warheads on missiles.

Notable in Monday's drills were the presence of the Spruance and South Korean destroyers equipped with the Aegis missile defense system. Touted by manufacturer Lockheed-Martin as "the world's most advanced combat system," Aegis can track more than 100 targets at a time and is the only naval system capable of intercepting ballistic missiles.

North Korea has increased its testing of submarine-launched ballistic missiles (SLBM) this year, its most recent in August flew around 500 kilometers, which Pyongyang claimed as a success.

Pyongyang blames the US for the escalation of tensions surrounding its nuclear program.