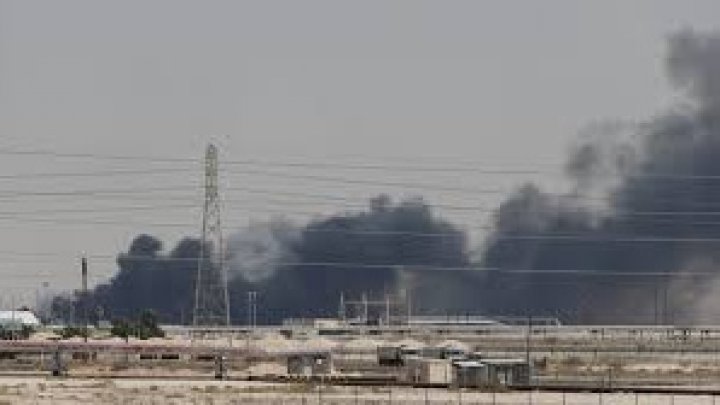 He dismissed a claim by Yemen's Iran-backed Houthi rebels that they had attacked the two facilities, run by state-owned company Aramco.

Iran said the accusations were "blind, incomprehensible and meaningless".

Correspondents say they could have a significant impact on world oil prices.

The attacks also come against a backdrop of continuing tension between the US and Iran, following US President Donald Trump's abandonment of a deal limiting Iran's nuclear activities and reinstatement of sanctions.

In a tweet, he said there was "no evidence" the drones came from Yemen.

He described the attack as "an unprecedented attack on the world's energy supply".

"We call on all nations to publicly and unequivocally condemn Iran's attacks," Mr Pompeo added.

The US would work with its allies to ensure energy markets remained well supplied and "Iran is held accountable for its aggression", he added.

The White House said Mr Trump had offered US support to help Saudi Arabia defend itself.

Mr Pompeo provided no specific evidence to back up his accusations.

The US said Iran was behind attacks on two oil tankers in the Gulf in June and July, as well as on another four in May. Tehran rejected the accusations in both cases.

If the rebels had deployed the drones from Yemen, they would have to have flown hundreds of miles.

One element of the Houthi statement on the attacks did however thank "co-operation with the honourable people inside the kingdom".

The Wall Street Journal has said experts are investigating whether the attacks could have been carried out from the north - either by Iran or its Shia allies in Iraq - using cruise missiles rather than drones. If so, it seems unlikely they would have escaped detection.

The Washington Post said the US government believed that 15 buildings at Abqaiq had been damaged on the west-northwest sides, not the southern sides facing Yemen.

A 2018 UN report concluded that the Houthis' Qatef-1 suicide drone was "virtually identical" to Iran's Ababil-T. The Ababil-T is considered a low-tech drone with a maximum range of about 150km (93 miles).

The distance from the nearest point of the Saudi Arabia-Yemen border to the closest target - Khurais - is about 770km.

Foreign ministry spokesman Abbas Mousavi addressed the issue in a statement, saying: "Such fruitless and blind accusations and remarks are incomprehensible and meaningless."

He said the US had adopted a policy of "maximum pressure" on Iran that had led to "maximum lies".

Mr Mousavi said Saudi Arabia had "repeatedly violated Yemen" and that the "Yemenis have shown resistance to aggression".

Iran's Tasnim news agency quoted a Revolutionary Guards commander, Amirali Hajizadeh, as warning that all US forces "up to 2,000km around Iran are within the range of our missiles".

A spokesman for the Saudi-led military coalition fighting in Yemen said investigations were still ongoing to determine who had carried them out.

Officials have said there were no casualties.

Saudi state media reported that Saudi Crown Prince Mohammed bin Salman had told President Trump in a telephone conversation that the kingdom was "willing and able to confront and deal with this terrorist aggression".

A military spokesman said the rebels had deployed 10 drones in the attacks.

Yahya Sarea told al-Masirah TV, owned by the Houthi movement and based in Beirut, that operations against Saudi targets would "only grow wider and will be more painful than before, so long as their aggression and blockade continues".

He said Saturday's attack was one of the biggest operations the Houthi forces had undertaken inside Saudi Arabia.

Yemen has been at war since 2015, when President Abdrabbuh Mansour Hadi was forced to flee the capital Sanaa by the Houthis. Saudi Arabia backs President Hadi, and has led a coalition of regional countries against the rebels.

Houthi fighters were blamed for drone attacks on the Shaybah natural gas liquefaction facility last month, and on other oil facilities in May.