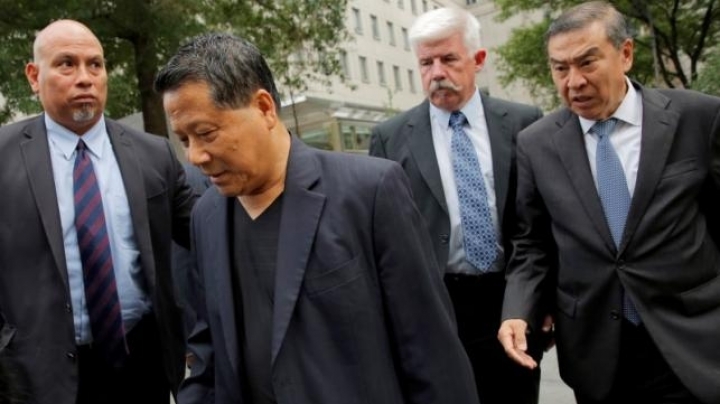 A U.S. prosecutor said on Monday that Chinese officials were involved in developing a United Nations-focused news outlet that was used to funnel bribes from a Macau billionaire to a former U.N. General Assembly president who died last week, reports Reuters.

Assistant U.S. Attorney Daniel Richenthal made that claim at a hearing in Manhattan federal court as he contended that a defense lawyer's prior work for the Chinese government may create a potential conflict in representing the real estate mogul, Ng Lap Seng.

Richenthal said evidence showed that Chinese officials were involved in talks with Ng about developing a U.N.-sponsored conference center for which Ng had bribed former General Assembly President John Ashe to gain his support.

He said Chinese officials were also involved in developing South-South News, which publishes articles related to the U.N. and development issues. Prosecutors said Ng funded the news outlet and used it as a conduit in the bribery scheme.

The officials' involvement, Richenthal said, included discussing what agenda could be advanced at South-South News.

In court, Tai Park, a lawyer for Ng, called the claim "interesting," but said it did not mean another of Ng's attorneys, Hugh Mo, had a conflict. The issue is expected to be discussed again at a hearing next month.

South-South News did not immediately respond to requests for comment.

In Beijing, Chinese Foreign Ministry spokesman Hong Lei said he did not "understand" anything about the investigation.

"But we want to point out that the investigation should take the facts as its foundation and not act on hearsay," Hong told reporters.

The court hearing was the first since Ashe, a former U.N. ambassador from Antigua and Barbuda who served as General Assembly president from 2013 to 2014, died in an apparent weight-lifting accident last week.

He was among seven people, including Ng, charged since October in what prosecutors say is an ongoing investigation into the scheme in which Ashe took $1.3 million in bribes from Chinese businessmen.

Prosecutors said those bribes included more than $500,000 from Ng in exchange for, among other things, Ashe seeking U.N. support for the conference center that Ng's company would develop.

They said the bribes included a $2,500-per-month job at South-South News for Ashe's wife.

That job was arranged by Francis Lorenzo, a suspended deputy U.N. ambassador from the Dominican Republic and South-South News' former president who prosecutors say acted as an intermediary. Lorenzo pleaded guilty in April.

In light of the allegations, the United Nations has been reviewing the accreditation status of South-South News, which has denied knowledge of Lorenzo's activities.