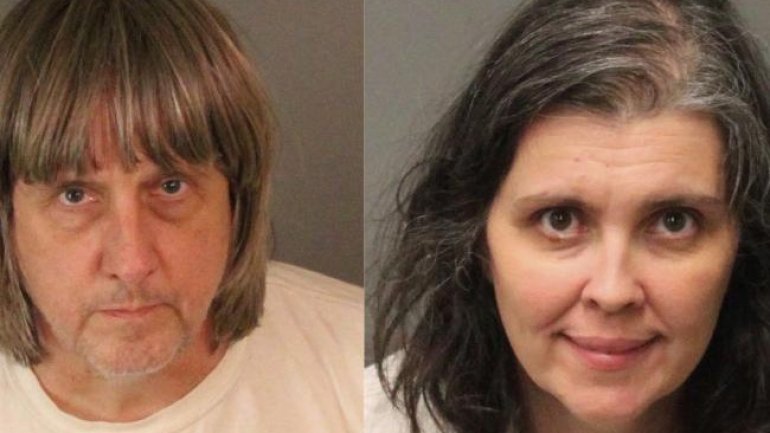 The couple behind America’s ‘House of Horrors’ allegedly had a more sinister plan after they shackled, tortured and starved their 13 children.

Parents David Allen Turpin, a 57-year-old computer engineer, and his homemaker wife Louis Anna Turpin, 49, wanted a 14th child and had high hopes of getting their own reality TV show and becoming millionaires.

Louise Turpin’s half brother, Billy Lambert, told the UK Mirror that it was her dream to be famous one day — and they moved to Perris in California in order to be closer to Hollywood so they could potentially make it happen.

“She used to say how they would be perfect for TV and would often ­mention they would be bigger than the reality show Kate Plus 8,” he told the Sunday People in the Mirror.

‘It is the reason they moved to California to be nearer to Hollywood.”

Lambert’s claim about the couple wanting to expand their family was also supported by Louise Turpin’s younger sister, Teresa Robinette.

She told the Mail Online she had a conversation about her baby plans just last month with her.

“Only last month Louise told me her and David were planning to have another child,” Lambert said.

“I asked her why on earth they wanted more children and she said about wanting a reality TV show.”

He said: “They thought it would make them millions and household names. They didn’t care about the kids — it was all about them.”

Lambert was reportedly the last person to speak with Louise Turpin before she and her husband were arrested.

The shocking revelations come as Riverside County District Attorney Mike Hestrin said that “hundreds of journals” have been recovered from the children’s home.

Police are hoping that these secret diaries will hold clues and “powerful evidence” on what really went on inside the “house of horrors”.

In an interview with ABC News in the US, Mr Hestrin said: “My guess is that’s going to be powerful evidence about what was happening from the perspective of the victims.

The 13 children found malnourished and shackled in their Californian home were allegedly deprived regular meals, access to the toilet, and daily showers.

The couple were arrested after their 17-year-old daughter — who had been planning her escape for two years, according to Mr Hestrin — climbed through one of the windows of their home and called 911 using a disconnected mobile phone she had found.

Police allege that the 13 Turpin children, ranging in ages from 2 to 29, were found living in squalor with some “shackled” to furniture.

The couple were charged with 12 counts of torture, seven counts of abuse of a dependent adult, six counts of child abuse or neglect and 12 counts of false imprisonment for crimes dating back to 2010.

David was also charged with one count of lewd act on a child under the age of 14 by force, fear, or duress.

Both plead not guilty to all charges and remain in custody. If convicted, each faces up to 94 years to life in prison.

Mr Hestrin alleged in his press conference that the Turpins, including parents and children, slept all day and were “up all through the night,” going to bed about 4 or 5am.

The children were allowed to shower no more than once a year and none had “ever” seen a dentist. They last saw a doctor more than four years ago and were fed very little.

While they were meant to be home schooled, he said the children “lacked a basic knowledge of life” when they were recovered.

Some did not know their age or what a police officer is.

Bizarrely, the couple allegedly purchased enough food for themselves and would leave some of it, including pies, out on the counter where their children could see — but could not eat it.

“A lot” of toys, all unopened, were also found inside the home, Mr Hestrin said.

Experts say the California couple accused of beating, shackling and abusing their 13 children may have used starvation as a weapon to control them.

Although their motives were still unclear, the couple may have denied the children food as a way to weaken them and assert power.

The children were also shackled and beaten for perceived minor infractions, authorities said.

The 17-year-old girl who escaped from the family’s house in Perris, California this week to call the police and reveal the alleged abuse, was so emaciated she appeared to be only 10, authorities said.

“You’re tired, your ability to stand up for yourself is at its limits,” said Dr. Roy Lubit, a New York-based child psychiatrist with expertise in post-traumatic stress disorder.

Lubit said that starving a child showed premeditation when compared with someone who lashes out and strikes his or her victim in a spasm of rage. “Hitting comes from angry outbursts, where with starving it's a prolonged period of wanting to domineer, be in control. It’s a power trip,” he said. Prosecutors said the Turpins would buy food for themselves, leaving apple and pumpkin pies on the kitchen counter but forbidding their children to eat it. Experts say the siblings would likely be left with permanent physical and emotional damage, such as anxiety and depression, as well as issues around food.

“When the brain is starved of proteins and other building blocks, brain development is going to be impacted,” Dr Richard Pan, a paediatrician who is a Democratic state senator from the Sacramento area, said.

The brain can be smaller than normal, and if typical developmental milestones are missed due to starvation, they cannot readily be made up later, he said. As the body struggles to protect the heart and brain, it essentially consumes other organs and even bones, said Dr. Dean Blumberg, associate professor of paediatrics at the University of California, Davis Children’s Hospital in Sacramento.

Growth is stunted and long-term anaemia and other nutritional deficiencies can lead to a drop in IQ as well, he said.

Psychological experts say the 13 children will have years of therapy ahead as they learn to live in a world that they never really knew existed.

But despite the trauma they’ve been through, the therapists say human beings are surprisingly resilient and, with years of work, many if not all of the children could eventually be able to lead normal lives.