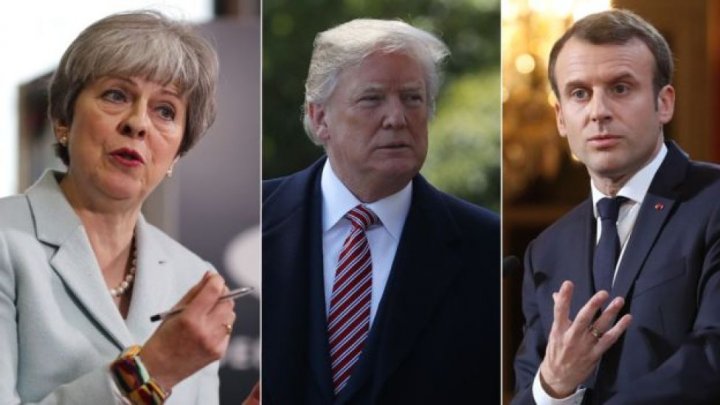 The strikes are in response to a suspected chemical attack on the Syrian town of Douma last week.

Explosions hit the capital, Damascus, as well as two locations near the city of Homs, the Pentagon said.

Russia's ambassador to the US responded by saying the attack on its ally "will not be left without consequences".

"The nations of Britain, France, and the United States of America have marshalled their righteous power against barbarism and brutality," President Trump said in an address to the nation from the White House at about 21:00 local time (02:00 BST).

"The purpose of our actions tonight is to establish a strong deterrent against the production, spread, and use of chemical weapons," he added.

The wave of strikes is the most significant attack against President Bashar al-Assad's government by Western powers in seven years of Syria's civil war.

At a Pentagon briefing shortly after Mr Trump's announcement, Gen Joseph Dunford listed three targets that had been struck:

Syrian state television said government forces had shot down more than a dozen missiles, and claimed only the research facility in Damascus had been damaged.

Three civilians had been injured in Homs, it said.

US Secretary of Defence James Mattis told journalists there were no reports of US losses in the operation.

In his earlier address, President Trump had said: "We are prepared to sustain this response until the Syrian regime stops its use of prohibited chemical agents."

But Secretary Mattis said that "right now, this is a one-time shot". Gen Dunford confirmed the wave of strikes had ended.

UK Prime Minister Theresa May confirmed British involvement, saying there was "no practicable alternative to the use of force".

But she also said the strikes were not about "regime change"

UK strikes carried out by four Tornado jets hit one of the targets mentioned by the Pentagon - a military site near the city of Homs which is believed to have housed precursor materials for chemical weapons, according to the UK ministry of defence.

"Dozens of men, women and children were massacred with chemical weapons," he said of the Douma incident a week ago - adding that "the red line had been crossed".

Reaction to the strikes was mixed among the international community.

The Nato Secretary General, Jen Stoltenberg, tweeted support for the western strikes, saying those who use chemical weapons "must be held accountable".

John Mc Cain, Chairman of the Senate Armed Services Committee and a top Republican who is often critical of the president, applauded Mr Trump for taking military action.

Across the aisle, however, some Democrats said that President Trump should come before Congress and receive authorisation for the use of military force.

"There's an obligation, particularly when dealing with matters of peace and security, to act consistently with the Charter of the United Nations and with international law in general," he said.

"I urge all Member States to show restraint in these dangerous circumstances."