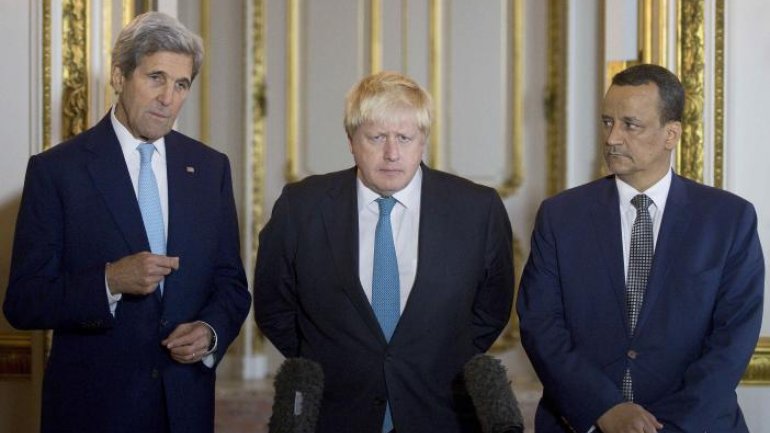 The United States and Britain called on Sunday for an immediate and unconditional ceasefire in Yemen to end violence between Iran-backed Houthis and the government, which is supported by Gulf states, reports Reuters.

A Saudi-led campaign in Yemen has come under heavy criticism since an air strike on a funeral gathering in the Yemeni capital Sanaa that killed 140 people according to a United Nations' estimate and 82 according to the Houthis.

On Saturday, a U.S. admiral said a destroyer had again been targeted in the Red Sea in an apparent failed missile attack launched from the coast of Yemen.

U.S. Secretary of State John Kerry said if Yemen's opposing sides accepted the ceasefire then the special envoy to the U.N., Ismail Ould Cheikh Ahmed, would work through the details and announce when and how it would take effect.

Kerry said they were calling for the implementation of the ceasefire "as rapidly as possible, meaning Monday, Tuesday".

The UN's special envoy said he had been in contact with the Houthi's lead negotiator and the government of President Abd-Rabbu Mansour Hadi. He also said he hoped for "clearer plans" for a ceasefire in the coming days

British foreign minister, Boris Johnson, said the conflict in Yemen was "causing increasing international concern; the fatalities that we're seeing there are unacceptable".