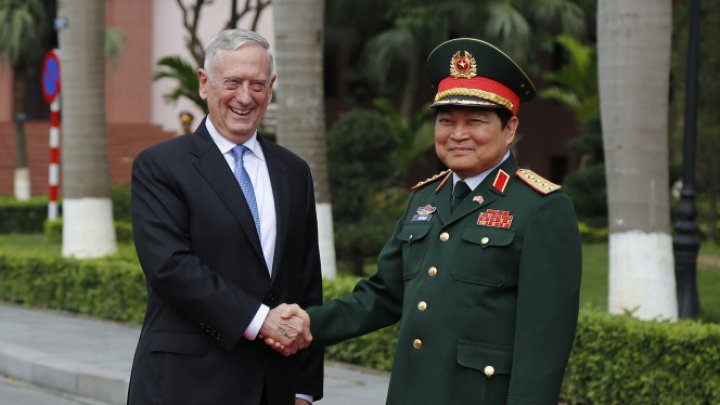 In a post-war first, the United States will send an aircraft carrier to Vietnam, Hanoi's defense ministry said on Thursday, dramatic evidence of deepening military ties between the former enemies more than four decades after the Vietnam War.

The announcement came during a two-day visit to Hanoi by U.S. Defense Secretary Jim Mattis that had been expected to focus on shared concerns about China.

The proposed visit is set for March at the central port of Danang, Vietnam's defense ministry said in a statement. Such a visit by a U.S. aircraft carrier could bring the most U.S. forces to Vietnam since the conflict ended in 1975.

Captain Jeff Davis, a Pentagon spokesman, confirmed the carrier visit was discussed by Mattis and his counterpart, and Vietnam's defense ministry was seeking final approvals from national leaders.

"We expect it will be approved and we will have a carrier visit in Danang in March," Davis said.

The arrival of a U.S. aircraft carrier in Vietnam will be welcomed by an emerging network of countries that are nervously eyeing China's military rise, particularly its assertive stance and island-building activities in the South China Sea.

The busy waterway is a vital global trade route linking Northeast Asia with the Middle East and Europe.

In particular, the military of U.S., Japan, India and Australia are working more closely together as a "quad" of liberal democracies across what they now term the "Indo-Pacific" – moves driven by mistrust of China.

India, Japan and Australia have all boosted military relations with Vietnam in recent years, with New Delhi providing advanced training for its emerging submarine forces and jet fighter pilots.