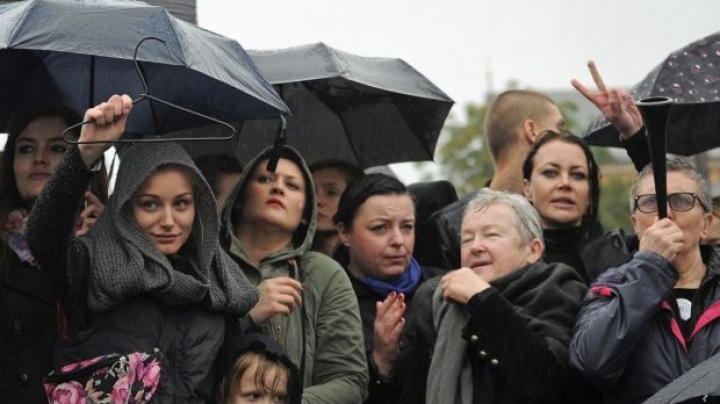 Up to 6 million women all over Poland went on strike, dressed in black and took to the streets on Monday to protest against the government's plans for a total ban on abortions, reports The Sydney Morning Herald.

They marched on the day dubbed "Black Monday" while counter-demonstrators and anti-abortion protesters marched in white to distinguish themselves from their ideological opponents.

Poland's abortion laws are already among Europe's strictest. Women are allowed to have an abortion only if the pregnancy is due to incest or rape, or if the life of the pregnant woman or the fetus is under threat.

Under the proposed bill, written by an organisation called Stop Abortion, even those exceptions would no longer exist. Women choosing an abortion illegally would face five years behind bars. Doctors could be sentenced to prison if found guilty of helping with or performing abortions.

Huge protests against the new legislation swept through 90 Polish cities. The Warsaw mayor's office said 24,000 Poles took to the streets of the capital, waving black flags to draw international attention to the proposed restrictions. On the event's Facebook page, organisers said the protest drew up to 116,000 participants nationwide. Other organisers put the total figure at up to 6 million.

Black Monday was the high point of protests that began two weeks ago. On social media, tens of thousands of Poles have posted pictures of themselves wearing black and staging demonstrations.

Foreign Minister Witold Waszczykowski dismissed the protesters, saying, "Let them have their fun".

The protests have won the approval of numerous Polish employers, including restaurant owners, museum and gallery directors, the deans of several universities and mayors of a couple of large cities, all of whom allowed their female workers to take a day off.

The protest idea was inspired by the story of Icelandic women who paralysed their country in 1975 by not going to work, and skipping housework and child-rearing tasks, to protest unfair employment practices and wage discrepancies. The women who participated in those protests sent the women in Poland a video message of solidarity, encouraging them to stand up for themselves and telling them in Polish, "Jestesmy z wami" ("we are with you"). On Facebook, Kenyan women also sent a message of solidarity.

The solidarity protests were also staged in other European cities, including Berlin, Brussels, London, Paris and Barcelona.

Poland introduced a restrictive abortion law, known as the "abortion compromise" and championed by the Roman Catholic Church, in 1993 after the collapse of Communism.

The Polish Catholic Church and other supporters of an abortion ban have said that it would preserve lives.