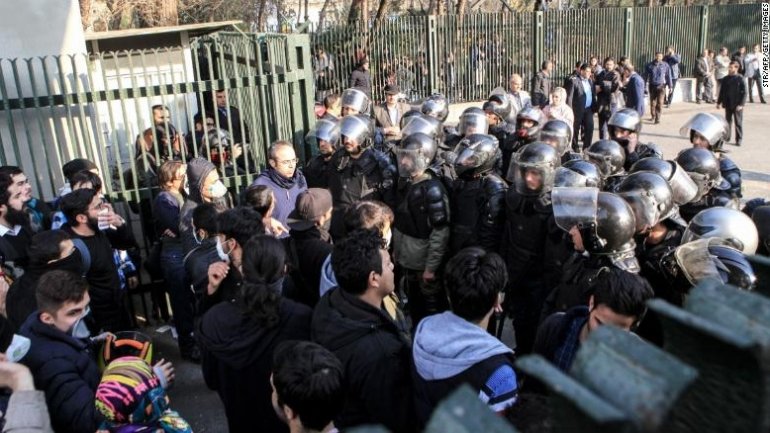 The University of Tehran is working to track and secure the release of its students who were arrested for taking part in recent anti-government protests in Iran, according to the semi-official Iranian Student News Agency.

"A committee has been established to follow up on and track Tehran University's detained students' situation. Our aim is to work with relevant authorities and facilitate the quickest release and return of those students to their studies and family embrace," Dr. Majid Sarsanghi, Tehran University's Deputy Chancellor for Cultural Affairs, is quoted as saying by ISNA.
It's not clear how many students have been arrested in connection with the protests, which broke out late last month. At least 21 people were killed, many in clashes with security forces trying to quell the rallies.
Authorities in Iran have said 450 people have been detained. The US State Department has put the number held at 1,000. It is unclear how many of the detained have since been released.
Rights group Amnesty International accused Iran of having an "appalling" track record of carrying out mass arbitrary arrests of peaceful demonstrators.
"Given the alarming scale of the current wave of arrests, it is highly likely that many of those held are peaceful protesters who have been detained arbitrarily and now find themselves in prisons where conditions are dire and torture is a common tool to extract confessions and punish dissidents," said Philip Luther, Amnesty International's research and advocacy director for the Middle East and North Africa.
Four UN human rights experts on Friday urged Iran to respect protesters' rights and allow freedom of expression and assembly.
The protests, the most powerful challenge to the regime in years, appeared to have fizzled Thursday, after a claim by Revolutionary Guards commander Mohammad Ali Jafari that the unrest was officially over.
Mass pro-government rallies have taken their place in many Iranian cities. Government supporters turned out in force in Tehran and elsewhere on Friday.
Read more at CNN
AFLĂ imediat Știrile Publika.MD. Intră pe Telegram