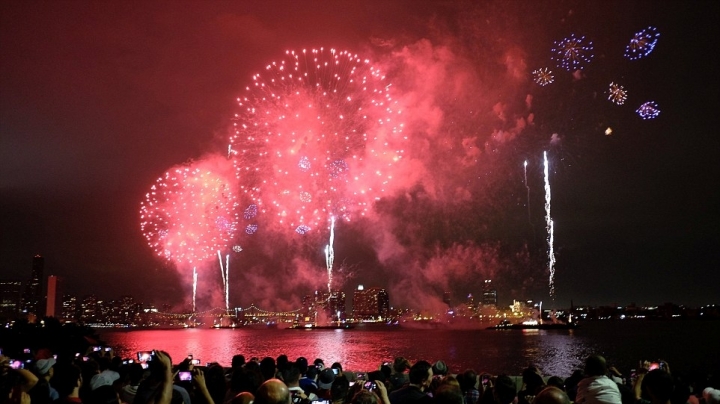 This year's Fourth of July was marked with parades, picnics, barbecues and baking contests draped in red, white and an extra layer of blue, as police ramped up patrols because of concerns about terrorism and gun violence, reports Daily Mail.

And while rain was forecast in many cities, many revelers tried not to let it dampen their fun.

In New York, more than a million people packed out balconies, rooftops and the banks of the East River to catch the 40th annual Macy's Fireworks display this evening, which the department store promised would be its biggest Fourth of July display since the millennium show of 2000.

The show featured more than 56,000 pyrotechnic shells, 22 hues and the New York debut of pyro-writing in the sky, all synchronized to patriotic tunes.

The musical accompaniment features the United States Air Force Band playing numbers including 'This Land is Your Land' and 'Stars and Stripes Forever,' and Grammy-winning vocalist Jennifer Holliday sang 'America the Beautiful.'

Security was heavy as police dispatched 5,000 officers to oversee the Macy's fireworks display in the Big Apple - the largest detail the New York Police Department has ever assigned on July Fourth.

Authorities said there were no known, credible threats against New York, but vowed to remain vigilant as more than a million spectators gathered to view the annual fireworks display over the East River.

Earlier, Police Commissioner Bill Bratton said: 'As we always have the capacity in New York to put out a lot of resources, that's the name of the game, in dealing with terrorist threats.'

Chief of Department James O'Neill said there would be officers equipped with heavy vests, helmets and rifles at the 24 entry points to see the show.

More than 30 police dogs will be on patrol as well as every NYPD boat from the marine unit, O'Neill said.

With the holiday taking place days after attacks in Baghdad, Dhaka and Istanbul, the New York Police Department deployed eight new 'vapor wake' dogs, trained to sniff out explosives on a moving target in a crowd.

The department's presence this holiday was also boosted by nearly 2,000 new officers just days after they graduated on Friday from the New York City Police Academy.

'You're going to see a lot of people in heavy vests, helmets and long guns and they can respond at a moment's notice to any incident,' NYPD Chief of Department James O'Neill told a news conference. 'There's also a lot you won't see.'

Meanwhile, President Barack Obama called America a 'miracle' that needs to be defended and nurtured on Monday during his final July Fourth celebration at the White House.

Obama made the brief comments to hundreds of people who gathered after rain forced officials to cancel an annual barbecue on the South lawn for military service members, veterans and their families.

It was the second straight year that weather scuttled the picnic.

The president also led the audience in singing 'Happy Birthday' to his older daughter, Malia Obama, who turned 18, reminding those gathered it's a father's job to embarrass his daughter.