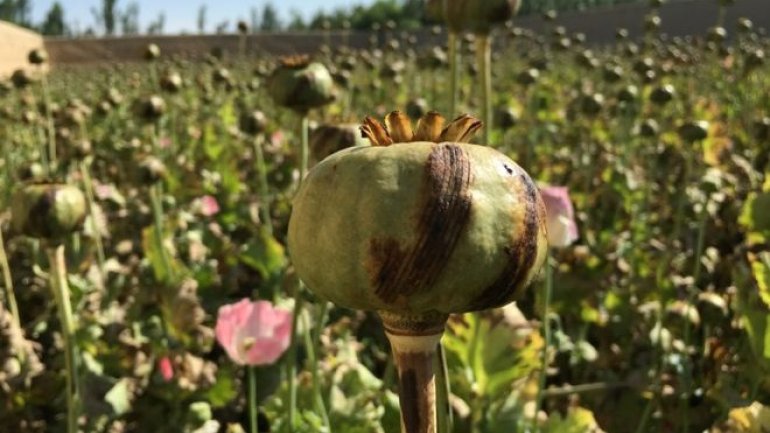 Opium production in Afghanistan has increased by 43% in the past year, United Nations officials have said, reports BBC.

The UN Office on Drugs and Crime (UNODC) said the area used to farm the poppy plant, the source of opium, increased by 10% to 201,000 hectares.

Afghanistan is the world's largest producer of the substance, which is the main ingredient in heroin.

Growing opium is a crime in the country, but it is still a major cash crop for impoverished farming communities.

The Taliban also taxes poppy production in areas it controls, which is a major source of income for its military activities.

The opium produced from the poppy plant is used to make some of the most powerful medicinal painkillers, such as morphine.

However, many nations cultivate their own supply for medicinal use, and Afghanistan's production of illicit opium is primarily sued for the illegal drug trade.

The Afghan government has a stated policy of eradicating poppy crops, but the crop is widespread in many government-controlled regions, and officials are often accused of turning a blind eye.

Earlier this year, the BBC's South Asia correspondent Justin Rowlatt visited poppy farms in the north-east, where one farmer told him the local government knew about his crop, but "they also know it is the only way anyone can make decent money."

Just 355 hectares of poppies were eradicated by provincial authorities in the last year - down more than a 90% since 2015, when almost 4,000 hectares were cleared.

Seven insurgents and one officer died during attacks on eradication teams this year. Seven more people were injured.

The southern region of the country is the most productive area, accounting for 54% of the entire national opium production.

Helmand province, which has seen a resurgent Taliban presence, is the single largest producer, with more than 80,000 hectares of poppy cultivation.

The region was a contested area between the Taliban and Nato-led forces, before the latter withdrew in 2014.