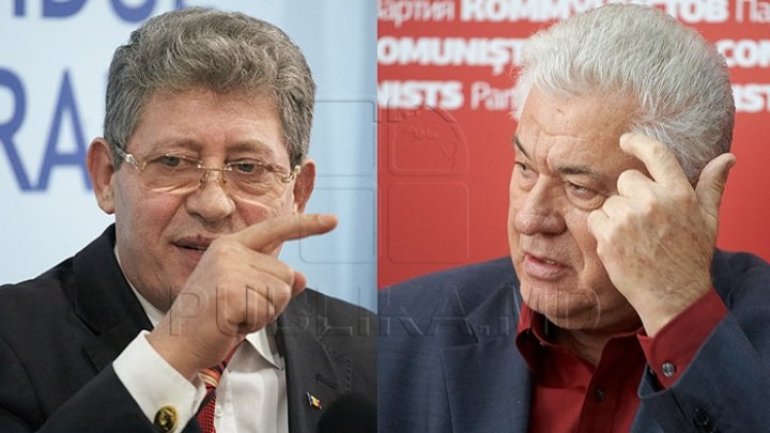 Romanian flag and the 100th anniversary of the Unification of the Romanian Principalities have triggered disputes between Mihai Ghimpu and Vladimir Voronin.

Liberal Party president proposed 2018 - the year will be 100th anniversary of Unification of the Romanian Principalities, to be declared the Year of the Union.

In turn, the PCRM president mocked Ghimpu for putting his tricolor on the table.

The voice was given by Communist leader Vladimir Voronin.

"Ghimpu, for whom are you working for? It's been 4 years since Romania ended financing you, you're still sticking with Romanian flag. Are you not ashamed? Don't you trust yourself?"

"I have no right to tell Volodea that you are older, you have been president. These three colors have also been the colors of Moldovan flag.

"It's my honor to wear this flag and I'll spend my whole life with this. It doesn't matter where I put it, on the table, in the tree or even in front of you. You said it's fascist flag, then you kissed this tricolor as Dodon.

"Finance? Thank you, I don't need money. I know how to launch politics without money

Liberal leader Mihai Ghimpu later proposed to parliamentarians that next year 2018 should be the Year of the Union.

"2018 will mark the 100th anniversary of the Great Union. On March 27, 1918 Sfatul Ţării or Moldovans and Romanians started the unification of the Romanians. We believe it would be right for us who are living in Moldova, former Bessarabia, to announce the year 2018, as the Year of the Union, "said the deputy, Mihai Ghimpu.

"New Year has not come. Ghimpu, how much did the Romanians pay for this thing? I proposed to you tickets, marauders. Go ahead, who keeps you here if you want to unite? If you have temperature and you have problems with health, do not stay in Parliament, go and treat yourself, 27 years you have bothered people, "PCRM deputy Vladimir Voronin said.

Mihai Ghimpu proposed that a parliamentary commission be set up to come up with an action plan for the Union's Centenary.

A condition was that no Communist and Socialist MPs should be delegated. In reply, PSRM deputies said that Mihai Ghimpu wanted to increase his rating among the election through such initiatives.

Liberals' initiative was not backed by Members.