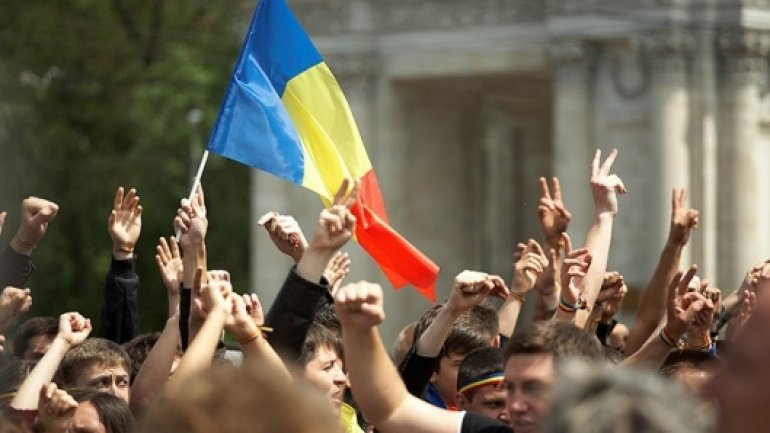 Members and sympathizers of several unionist organizations on both sides of the Prut river went on a march today through downtown. According to them, the purpose of the event was to promote the union of Moldova and Romania.

The marching participants traveled to the monument of Stephen the Great, they went to Gavriil Bănulescu-Bodoni Street and reached the Europe Square on the City Council Street. They believe that Moldova will develop in the economic and social field if the union with Romania is to take place.

"I want to be united with Romania, as long as we are still alive, we want to be together, the union is great."

"It takes a better future for children, grandchildren, because we with Romanians are the same heart."

The event was supported by several inhabitants of Romania.

"We have come to align ourselves with our brothers across the Prut, with all those who agree that Romania was the great one that was united in 1918."

"We are with you, we want Moldova to join the motherland and be a whole."

However, there was no incident between the marchers and those who opposed the union with Romania.

The organizers say that they planned several events to promote the idea of union next year. It will be a hundred years after the Great Union in 2018.

"For 2018, we have a concrete plan to promote union, such as the Union Caravan, then we'll go through the Moldovan villages," said the ODIP leader, Vlad Bileţchi.

"We just want to convey a simple message: the year 2018 is about union. We love Romania, we love the Republic of Moldova, we want to be the same state," said George Simion, the leader of Action Action Platform.

According to the organizers, about three thousand people participated in the event.