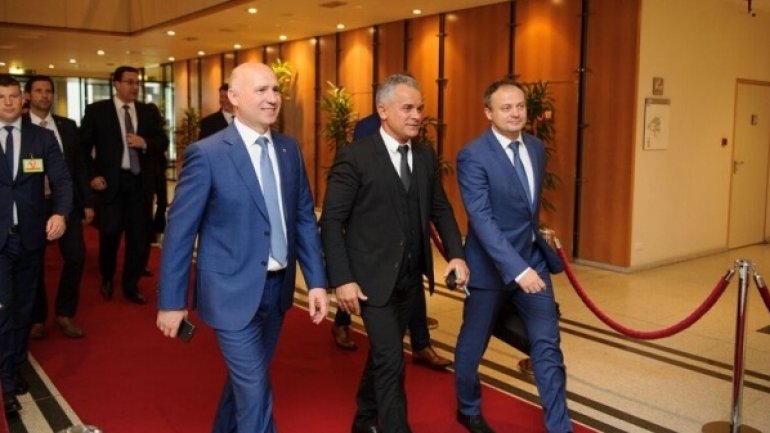 The Democratic Party of Moldova leadership and Deputy Head of European Parlaiment, Ioan Mircea Pascu, leaders of the European People's Group have had a meeting in the context of the official visit of Moldovan authorities in Brussels. The main topics highlighted were: the reform undertaken, the issues with the Russian Federation and national security.

The PDM leader, Vlad Plahotniuc has stated the main steps taken by Moldovan authorities in the modernization of the country. He highlighted several issued with Russia, saying Romania remains a loyal partner of Moldova.

The official welcomed the presence of PDM leadership in Brussels, pointing out that Democrats need to inform on the current situation in the country. He stressed the need for a strategic vision where Moldova needs to remain impartial.

The topic of the backing fraud was also discussed by Vlad Plahotniuc at the meeting with Petras Austrevicius, pointing out the pressure on certain services to abandon the investigation on the case. In this context, PDM had the initiative to ban Russian propaganda, idea also supported by the European deputy.

"It's Moldova's right to ban propaganda. It should have been done long before" , said ALDE Deputy President.

Further electoral reform was discussed, while the deputy stated the need of the project. Several risk were also pointed out in the reform of the electoral system, such as gender equality in the Parliament.

The presence of PDM was welcomed by Rebecca Harms. Prime Minister Pavel Filip, deputy chairman of PDM has also presented the main Governmental reforms and its results.

According to Pavel Filip, the opposition parties are trying to persuade the European parliament to stop the financial funding.

"The political shows shouldn't get to the European Parliament" , said Pavel Filip.

For his part, the President of Parliament, Andrian Candu, deputy chairman of the PDM, mentioned that the mixed electoral system was a promise made to Moldovan citizens for 17 years already. Thus, all recommendations of the Venice Commission will be taken into account.

Rebecca Harms stated the strict control needed in order for the EU money to be spent efficiently.

"I agreed to postpone the funding when Igor Doon said that the money were stolen. The information needs several checks", said Rebecca harms.

According to Vlad Plahotniuc, the president's statement has affected the Government, but Igor Dodon's actions highlight only PR and preparation for the parliamentary elections in 2018. His statements were fake and he knows they would have been taken into account in Brussels" , Vlad Plahotniuc said.

The delegation led by Vlad Plahotniuc also met with the leaders of the most important political group in the European Parliament, the European People's Party.

The PDM leadership and the EPP leaders also discussed the need to preserve pro-European governance after the 2018 parliamentary elections. The issues of electoral reform, corruption, propaganda, media freedom, and others of topics were also discussed.