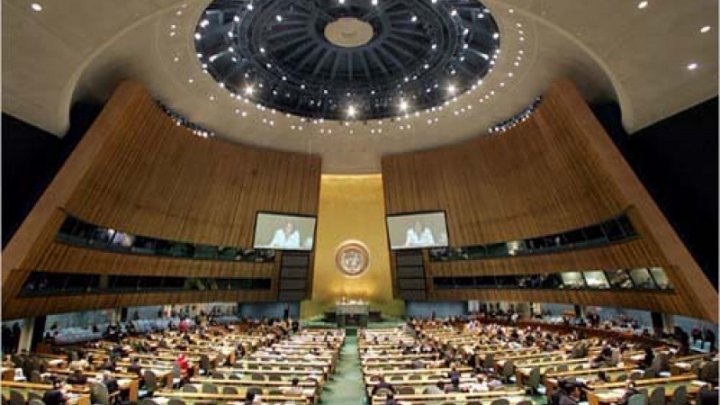 The UN General Assembly approved the draft resolution tabled by our country and seven other states on the withdrawal of Russian troops from the territory of Moldova. The document received 64 votes YES, 15 NO and 83 abstentions.

In the speech at the UN Assembly, Foreign Minister Tudor Ulianovschi said the project should not be qualified as an unfriendly gesture towards another country.

"The continued presence of Russian troops and weapons on the territory of the Republic of Moldova without its consent is not only incompatible with its independence, sovereignty, territorial integrity and permanent neutrality, but also with international law and the provisions of the UN Charter", Tudor Ulianovschi said.

Prior to the vote, the Russian representative requested the postponement of this issue for the next session of the UN Assembly.

Along with Moldova, the draft resolution was signed by Romania, Ukraine, Georgia, Estonia, Latvia, Lithuania and Canada. The text of the document reviews the commitments made by Russia at the 1999 OSCE Summit in Istanbul on the withdrawal of arms and troops deployed in the Transnistrian region. The project points out that it is the Russian military in the Task Force and not the Russian peacekeepers.

According to the Constitution, the project states that the Republic of Moldova has proclaimed its permanent neutrality, and the stationing of foreign troops on national territory is forbidden. The signatory countries have reaffirmed the need for UN member states to respect the sovereignty and territorial integrity of other states, not threaten or use force against another Member State.
AFLĂ imediat Știrile Publika.MD. Intră pe Telegram