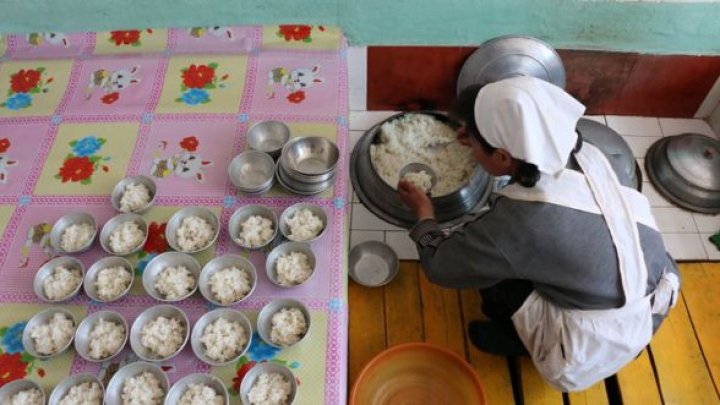 foto: People are going hungry in North Korea, the head of the WFP said, but are not starving/WFP/SILKE BUHR
AFLĂ imediat Știrile Publika.MD. Intră pe Telegram

The head of the UN's World Food Programme (WFP) believes there is a "sense of optimism" among North Korea's leaders after enjoying what he said was unprecedented access to the country, writes BBC.

David Beasley spent two days in the capital, Pyongyang, and two outside it, accompanied by government minders.

He said the country was working hard to meet nutritional standards, and hunger was not as high as in the 1990s.

"There is a sense of turning a new page in history," he told the BBC.

Relations between North Korea and the rest of the world have seen a dramatic shift.

Last year the North Korean government carried out a string of nuclear and missile tests.

But next month, its leader Kim Jong-un will meet US President Donald Trump, in what would be the first time a sitting US president has ever met a North Korean leader.

Confirmation of the meeting came after landmark talks between North and South Korea. Mr Trump announced the details of the meeting - in Singapore on 12 June - earlier this week, hours after he welcomed home three US detainees released from North Korea.

David Beasley visited North Korea from 8-11 May. The visit included trips to WFP-funded projects - a children's nursery in South Hwanghae province and a fortified biscuit factory in North Pyongyan province.

He told the BBC's Radio 4 programme Today that the farming he saw in the countryside reflected the fact that only about a fifth of the land is arable.

"One of the most powerful things that I saw was out in the countryside - it's spring, they're planting - there's not mechanisation, you've got oxen pulling ploughs, men and women in the fields," he said.

"It's very structured, very organised, every foot and inch of dirt is being toiled with rakes and hoes and shovels and they're literally planting crops up to the edge of the road, down embankments, using every available space, because it is a land that's mostly mountainous.

"I didn't see starvation like you had in the famine back in the 1990s, that's the good news. But is there a hunger issue, is there under-nutrition? There's no question about it."

Between 1994 and 1998, hundreds of thousands of people are believed to have died in North Korea in a widespread famine.

After drought last year, the UN said seven in 10 North Koreans were relying on food aid, while four in 10 were malnourished.

Last month the UN requested $111m in aid funding to help people in North Korea. The US has offered to help rebuild the country, on condition of denuclearisation.