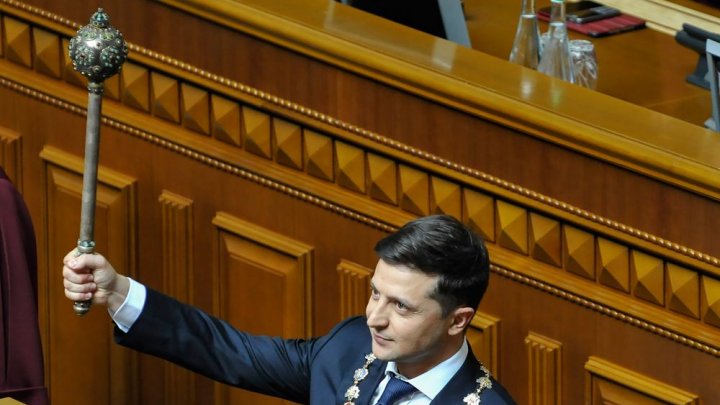 foto: Volodymyr Zelensky during his inauguration ceremony on May 20. Photographer: Sergei Chuzavkov/Getty Images

Following his inauguration on Monday, Ukrainians are finally getting a glimpse of who’ll be working for their new leader.

TV comic Volodymyr Zelenskiy’s successful campaign for the presidency was vague on how he’d tackle corruption and gave little away on his team. While his entourage included reformist ex-ministers popular among international investors, business links to exiled billionaire Igor Kolomoisky, whose television channel airs Zelenskiy’s shows, worried many.
Adding fuel to that fire, Zelenskiy this week named Andriy Bohdan, a lawyer who’s worked in the past for both him and Kolomoisky, as his chief of staff, writes Bloomberg. That’s causing concern about the fate of Ukraine’s biggest bank, whose nationalization is being challenged by the tycoon in a move that could threaten billions of dollars of aid from the International Monetary Fund and harm the economy.

Zelenskiy had promised to select experienced professionals for key roles. But his deputy chiefs of staff include an executive producer from his TV production company and a scriptwriter and producer from his popular Servant of the People show, where he plays a fictional president.

“The main criteria for these appointments were loyalty and trust,” Yuriy Yakymenko, an analyst at the Razumkov Center for Economic and Political Studies in Kiev, said by phone. “That’s why hopes that new professional people would come are dashed. Bohdan’s appointment brings the biggest concern as it strengthens suspicions over links with oligarchs and raises questions from Western partners.”

As well as curbing graft, Zelenskiy vowed to bring peace to eastern Ukraine, where a war with Kremlin-backed fighters erupted in 2014 after Russia annexed Crimea. In another early move that may help him achieve that goal, he replaced the chief of Ukraine’s general staff.

Many questions remain. While central bank Governor Yakiv Smoliy looks set to keep his job, Zelenskiy has said he’ll fire the top prosecutor, who’s unpopular with voters and Western donors alike. The fate of former Finance Minister Oleksandr Danylyuk, a prominent member of Zelenskiy’s campaign but still without a post, is also unclear.

Addressing those issues may have to wait. On Wednesday, the speaker of parliament signaled that Zelenskiy’s push to hold early elections for the assembly in July faces opposition and a probable legal challenge.

Parliament, gathered for an emergency session at Zelenskiy’s request, refused to vote on his proposals to amend election legislation, abolishing single-mandate districts. Instead, lawmakers criticized him over his appointments.