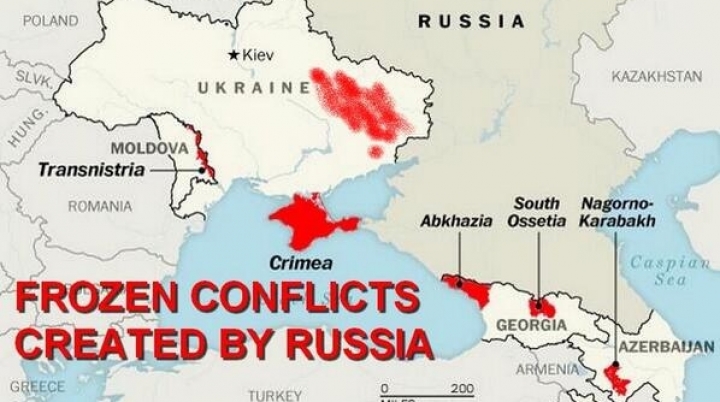 Georgia's president, Giorgi Margvelashvili, claims Russia is "ready to destabilize half of Eurasia". He is sure the war in Ukraine proves that Russia is ready to activate any of the frozen conflicts in its neighbourhood in order to retain influence.

Giorgi Margvelashvili shared his view on the regional situation with the EUobserver in Brussels after meeting NATO and E.U. leaders earlier in the week.

"It's not about predicting where the next problem will be. It's about creating an effective early warning system in the region", the Georgian president suggested.

Former NATO Supreme Allied Commander Europe Philip Breedlove back in March 2014 right after Russia's annexation of Crimea, communicated the following: "We think that what we see now is a mechanism in which "frozen conflicts " are used to block access to the E.U. and NATO. In other words, if Russia is concerned that some of the countries are moving to the West, the situation outcome will be an invasion, a "frozen conflict", then no one will want to approach NATO because this would mean conflict with Russia."

A good example of the above-mentioned is Georgia. In 2008, Russian army undermined a territorial integrity of the country, which was to launch closer cooperation with western political and security institutions, disrupting Abkhazia and South Ossetia regions. A five-day war resulted in the deployment of Russian troops in South Ossetia and Abkhazia and Moscow's recognition of the territories as sovereign nations leaving Georgia far behind.

The events in Transnistria, a "breakaway" formation separated by the Kremlin from Moldova, were instigated after the declaration of independence by Moldova in 1991. The Russian-speaking part of the Transnistrian population feared the creation of a "nationalistic" Moldovan state seeking ties intensification with its historically close neighbor – Romania. The conflict ended with the Russia-negotiated ceasefire with Moscow sending to Transnistria a contingent of "peacekeepers", which is still based there.

The Nagorno-Karabakh conflict, which lies inside Azerbaijan but controlled by ethnic Armenians, has been the site of a bloody separatist war for the past 25 years. Open hostilities came to an end in 1994, after the deaths of some 30,000 people. Since then, the mountainous, landlocked region has run its own affairs with heavy military and financial backing from Armenia. The recent outbreak of violence took place in May, this year.

However, Russia has long been involved in the conflict, acting as a major supplier of arms to all parties, as well as providing its diplomatic mediation as soon as the tensions rise. At the same time, the fact that Moscow and Yerevan are already allied with a Russian military base located in Armenia makes it difficult for Russia to determine which country to mainly support in the conflict.

No wonder that Russia backs separatists in reform-directed countries, all of which are actively pursuing closer relations with the EU: Ukraine, Georgia, and Moldova.