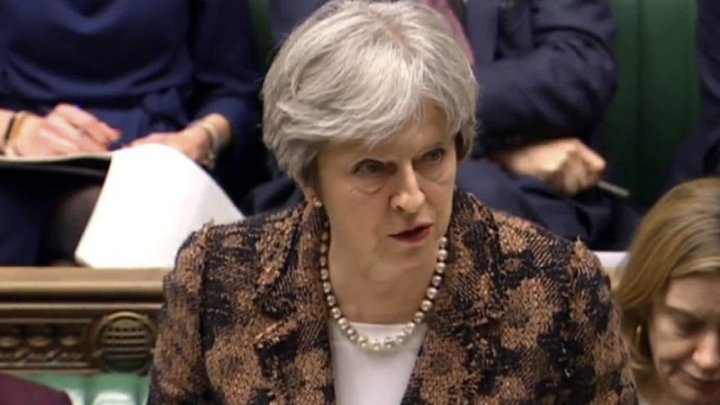 foto: British Prime Minister Theresa May gave Russia a deadline of midnight Tuesday night to explain how an ex-spy was poisoned with a Soviet-era nerve agent, and now will contemplate whether to bring sanctions after Moscow ignored the ultimatum. (Reuters)
AFLĂ imediat Știrile Publika.MD. Intră pe Telegram

British Prime Minister Theresa May is set to chair a meeting of the U.K.'s National Security Council today to consider sanctions against Russia after Moscow ignored a deadline to explain how a nerve agent developed by the Soviet Union was used to target a former spy in England.

May was weighing a range of economic and diplomatic measures in response to the assault on Sergei Skripal and his daughter Yulia. The two remain in critical condition in a hospital in Salisbury, in southwest England.

On Tuesday, Russian Foreign Minister Sergey Lavrov said Russia would only co-operate with Britain on the investigation if it received samples of the poison collected by investigators. Russia's embassy in the U.K. also warned any sanctions would "meet with a response."

This time around, Britain is considered to be highly likely to expel some Russian diplomats, possibly including Ambassador Alexander Yakovenko. That would almost certainly result in the tit-for-tat expulsion of British envoys in Moscow. While that would further fray already strained diplomatic relations, it would have a limited effect on Russia.

Other possible moves include freezing or even confiscating the U.K. assets of Russian oligarchs deemed close to President Vladimir Putin, refraining from sending high-level officials to soccer's World Cup in Russia this summer, or even pushing for a bolstered NATO military presence in the Baltic region.

At a meeting Wednesday in Geneva of the United Nations Human Rights Council, Britain said the use of a military-grade nerve agent was a flagrant breach of international law and should serve as a warning to the international community.

"The council and the United Nations General Assembly have decried Russia's violations of international law with alarming regularity. Its reckless behaviour is an affront to all this body stands for," British Ambassador Julian Braithwaite said.

Meanwhile Canadian Foreign Affairs Minister Chrystia Freeland said Canada condemns "the despicable use of a chemical agent" in the March 4 attack in the United Kingdom.

"We condemn in the strongest terms the despicable use of a chemical agent on the sovereign territory of the United Kingdom," Freeland said in a statement early Wednesday.

"Russia's likely involvement in this attack is a serious breach of the rules-based order.

"Canada offers its complete support to the United Kingdom and calls on all states to co-operate fully with British investigators," Freeland said.

May announced Monday that British investigators have identified the substance used in the attack on Skripal as being part of the Novichok group of nerve agents, which were developed by the Soviet military during the 1970s and 1980s.

Skripal, a former Russian military intelligence officer, became a double agent and provided information to British intelligence in the 1990s and 2000s. He was arrested in Russia in 2004, put on trial and convicted of treason, but later released in a spy swap.

He had been living under his own name in the small city of Salisbury for eight years before the attack without attracting any public attention.

Meanwhile, the cases of other Russians who have died under mysterious circumstances are being raised. British Home Secretary Amber Rudd said police and the domestic security service will look into 14 deaths in Britain that might be linked to Russia.

In the most recent case, British counterterrorism police on Tuesday took charge of the investigation into the death in London of a Russian businessman because he was connected to a prominent Kremlin foe.

The death of Nikolai Glushkov was confirmed by his lawyer in Russia. Police said there was no evidence so far to suggest any link to the March 4 poisoning of Skripal and his daughter.

Attorney Andrei Borovkov told Russian media outlets that Glushkov had died, but said he was unaware of the time and circumstances. Reports in British and Russian media said Glushkov, who was in his late 60s, was found dead at his home in southwest London.

Police said counterterrorism detectives are leading the investigation "as a precaution because of associations that the man is believed to have had."

Glushkov was an associate of Boris Berezovsky, a Russian oligarch and Kremlin critic who died in London in 2013. An inquest failed to determine whether he had killed himself or died from foul play.

Glushkov told The Guardian newspaper in 2013 he didn't believe Berezovsky's death was suicide. "I'm definite Boris was killed," he said