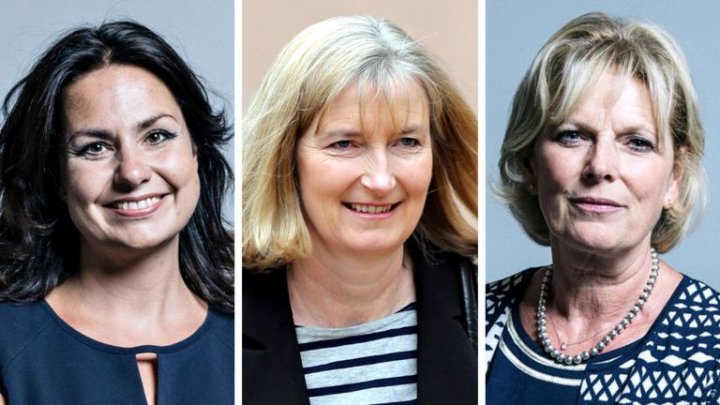 Three Tory MPs have resigned from the party to join an independent group, set up by former Labour MPs.

Anna Soubry, Sarah Wollaston and Heidi Allen wrote a joint letter to Theresa May to confirm their departure, informs BBC.

The PM said she was "saddened", but her party would "always offer... decent, moderate and patriotic politics".

The three criticised the government's "disastrous handling" of Brexit and said it had undone "all the efforts to modernise" the Conservatives.

The pro-Remain trio will join the new Independent Group - made up of eight Labour MPs who resigned from their party over its handling of Brexit and anti-Semitism - saying it represented "the centre ground of British politics".

The move has reduced the government's working majority to nine MPs.

The group now has more MPs in Parliament than the Democratic Unionist Party and equals the number of Liberal Democrats.

A tweet from the Independent Group welcomed the new members, adding: "Both our parties are broken. We are going to #ChangePolitics for the better."

In the letter, the former Tory MPs - who all support the People's Vote campaign for another EU referendum - said the party was "in the grip" of the DUP and the pro-Leave European Research Group over Brexit, and said there had been a "dismal failure" to stand up to them.

They wrote: "We find it unconscionable that a party, once trusted on the economy, more than any other, is now recklessly marching the country to the cliff edge of no deal."

The three MPs said they will support the government on areas such as the economy, security and improvements to public services, but they felt "honour bound to put our constituents' and country's interests first" over Brexit.

They told Mrs May: "We voted for you as leader because we believed you were committed to a moderate, open-hearted Conservative Party.

"Sadly, the Conservative Party has increasingly abandoned these principles and values with a shift to the right of British politics."

In an email to her constituents, Ms Soubry said she now had more in common with her fellow Nottinghamshire MP Chris Leslie - a founding member of the Independent Group and former Labour member - than many in her own party.

"It is time to realign British politics and get back to the centre moderate ground," she said.

And Ms Allen highlighted her concerns around poverty, as well as Brexit, in a statement, saying: "I can no longer represent a government and a party who can't open its eyes to the suffering endured by the most vulnerable in society - suffering which we have deepened whilst having the power to fix."

She said she was "excited" about the future, adding: "I want to be part of something better, a party that people vote for because they want to, not because they feel they have to."

Liberal Democrat leader Sir Vince Cable said his party would "hold out the hand of friendship" to the Independent Group and said they already had "a good working relationship" with the MPs.

Theresa May said the UK's membership of the EU had been "a source of disagreement both in our party and our country for a long time", so "ending that membership after four decades was never going to be easy".

But, she added: "By delivering on our manifesto commitment and implementing the decision of the British people we are doing the right thing for our country. And in doing so, we can move forward together towards a brighter future."

The party's deputy chairman, Tory MP James Cleverly, told BBC Radio 5 Live that the resignations were "very sad and disappointing", which was echoed by Communities Secretary James Brokenshire. But he added that the focus "has to remain on delivering Brexit" and the Conservative party was "a broad church and will remain so".

Work and Pensions Secretary Amber Rudd said it was a "great shame to have lost the commitment and undeniable talent" of the three MPs.