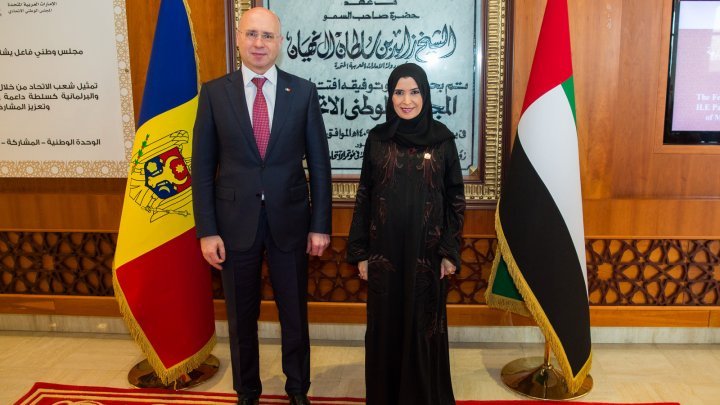 The parties discussed strengthening diplomatic, political and economic relations between the two countries.

Premier Pavel Filip praised the intensification of the bilateral dialogue, including at parliamentary and government level.

According to the official, the Chisinau government took several decisions to stimulate the trade relations including abolition of the visa regime for Emiratis and opening of the Moldovan Embassy and the Consulate General in the UAE.

Pavel Filip mentioned that this was an effective platform for stimulating investment and trade between countries.

Officials have expressed interest in harnessing potential in the economic sector, following the signing of agreements on the promotion and mutual protection of investments, as well as in avoiding double taxation and preventing tax evasion with regard to income taxes.

The signing of agreement on Economic and Technical Cooperation between two countries is welcomed which will form the basis of the creation of the Intergovernmental Commission for Economic Cooperation and will allow the formation of working groups in concrete areas.

The President of the UAE Federal Council, Amal Al Qubaisi, was convinced that agreements and the abolition of the visa regime for UAE citizens create opportunities for businessmen in both countries, promoting Moldova as a destination for investment. In this respect, Pavel Filip invited the Emirati businessmen to participate in the privatization of Moldovan companies in the fields of telecommunication, air, energy and agriculture.

Officials confirmed the interest in exchanging experience both in the economic and financial fields, as well as in education and culture.