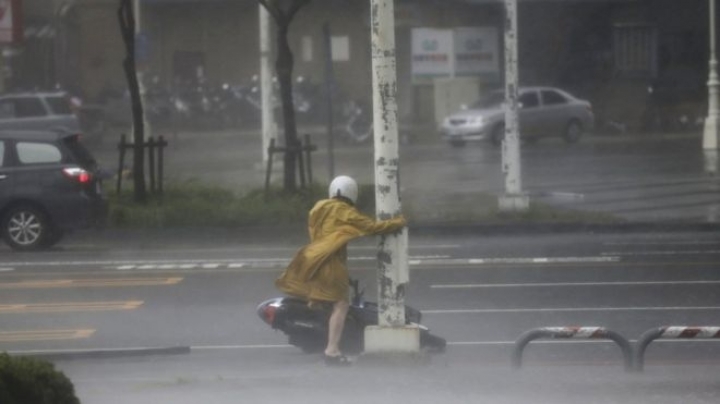 "I have never seen anything so scary in my entire life," 72-year-old Ma Wenhuan, who lives and works in Xiamen, told CNN. "We had to put so many buckets out to catch all the leaks."

Despite the winds lessening after landfall, they were strong enough to knock down trees, break windows and push a large inflated moon down the city's streets. The moon had been part of a display to mark the Mid-Autumn Festival.

The powerful storm first raked southern Taiwan, bringing torrential rains and winds of up to 370 kilometers per hour - faster than a Formula One race car.

One person died and 44 people were injured as the typhoon surged over the island, according to a Taiwan Red Cross spokeswoman.

More than 900,000 households had lost power, the spokeswoman confirmed, while another 500,000 had issues with water supply. Hundreds of thousands were also waiting for repairs, she said.

Meranti is the strongest typhoon since Super Typhoon Haiyan devastated the Philippines in 2013.

When it made landfall over mainland China, the storm's maximum sustained winds were 230 kph with gusts of up to 280 kph.

Turn up the sound..Doors straining against #TyphoonMeranti in our hotel, landed near Xiamen as equiv. Cat4 hurricane pic.twitter.com/zBNsGx7tnm

Meranti's strength had prompted China to issue its highest warning for high ocean waves as emergency crews and officials prepared for the deluge.

Despite Typhoon Meranti weakening quickly as it continues to move inland, heavy rainfall and flash flooding, as well as dangerous winds, will continue for the next 48 hours.