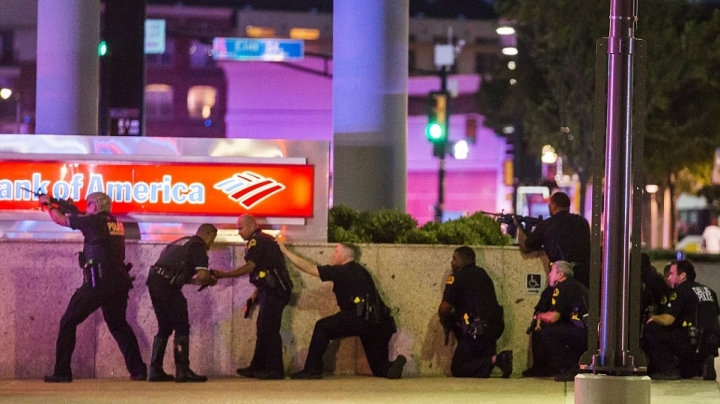 Two snipers have shot 11 police officers - killing at least four - and may have planted a bomb in downtown Dallas, reports Daily Mail.

The two gunmen opened fire from 'elevated positions', picking off officers 'ambush style' as they manned a protest over the deaths of two black men, police chief David Brown said.

A gruesome video shows a heroic policeman taking on one of gunmen, but being gunned down by the shooter before being shot again execution-style, from point-blank range.

Both suspects have been caught and taken into custody, with one detained following a shootout with police.

As they were detained, they are said to have told officers: 'The end is coming... and there are bombs all over the place.'

Officers found a suspicious package near where one of the gunmen was caught and a bomb squad are dealing with it.

Police said two people are being questioned after they were spotted speeding away from the scene of the shooting in a black Mercedes. An officer saw one of the pair hurriedly putting a camouflage bag in the back of the car before driving off 'at a high rate of speed'.

Another man, named as Mark Hughes, was pictured walking through Dallas with what appeared to be an assault rifle. He turned himself into police after cops made a public appeal and his family said he was an innocent bystander.

Four police officers have died and as many as three others are in a critical condition. A member of the public was also shot.

'Our worst nightmare has happened,' Dallas Mayor Mike Rawlings said. 'It is a heartbreaking moment for the city of Dallas.'

The shooting started at 8.45pm as hundreds of protesters marched through Dallas demanding justice for two black men shot dead by police earlier this week.

Another video captures semi-automatic gunfire ringing out, with dozens of shots heard as people scream and run for cover.

One of the alleged shooters - wearing tactical gear and a bulletproof vest - was hunkered down in a garage earlier on Thursday evening and engaged cops in a shootout before he was detained, a police source told Fox 4.

An horrific video taken on a cell phone by a terrified Dallas resident shows a heroic policeman trying to shoot one of the gunmen.

The officer is seen ducking behind a pillar but being shot by the gunman, who then stands over the cop and pumps another bullet into him.

Police Chief Brown said that it appeared the shooters 'planned to injure and kill as many officers as they could'.

The suspects 'have threatened to plant a bomb in the downtown area', Brown added.

It is not known if the shooters were protesters.

Dallas Police released an image of a man - named as Mark Hughes - brandishing a rifle as he walked through the city carrying what appeared to be an assault rifle and wearing a camouflage shirt. The force tweeted: 'Please help us find him!'

However, a video shows the black man wandering among panicked protesters moments after gunfire erupted and he is not shooting.

A man claiming to Hughes' brother tweeted that he was not involved in the shooting and had taken himself to a police station after Dallas Police released his picture.

A man who is believed to have been a protester - and not involved in the shooting - was arrested shortly after the shooting.

Officers were also seen stopping a man at gunpoint from leaving downtown Dallas in a white SUV.

The search for the gunmen stretched throughout downtown, an area of hotels, restaurants, businesses and some residential apartments. The scene was chaotic, with helicopters hovering overhead and officers with automatic rifles on the street corners.

Hundreds of people had marched through Dallas peacefully earlier on Thursday, demanding justice for Alton Sterling and Philando Castile, who were shot dead by police.

Police officers were seen shielding bystanders as they tried to evacuate the streets.

Thousands of people attended demonstrations across America, with marches taking place in New York, Atlanta, Philadelphia, Chicago and Washington DC, as well as in Louisiana and Minnesota - where the two black men were killed.

Hundreds of people gathered in Times Square and Union Square in New York on Thursday to protest against the shootings, with tensions bubbling over.

A group of women among the protesters were arrested, although it is not clear whether the demonstrations became violent at any stage.

Dozens more formed a crowd outside the White House in a symbolic protest that saw them wave placards and chant for change.

Protests also took place in Chicago, Philadelphia and Atlanta, as well as in Baton Rouge, where protesters continued to block traffic.

Also voicing her anger was Beyonce, who paused her show in Glasgow, Scotland, to display names of police brutality victims.

The furious demonstrations came as President Obama called for calm, but pleaded with police officers to treat minorities equally.

Obama said the recent spate of shootings was 'not just a black issue', saying all Americans should be troubled by black and Hispanic people being killed by cops.

The president was speaking in Warsaw, Poland, following the fatal police-involved shootings of street seller Alton Sterling, in Louisiana, and Philando Castile, in Minnesota.

Governor of Minnesota Mark Dayton also joined the calls for change, launching a startling  attack on 'racism' in the police, saying he does not believe that Castile would have been shot dead on Wednesday if he was white.

Gov Dayton said there was 'every indication' that police conduct in the shooting of Castile, a black man, was 'way in excess' of what the situation warranted.