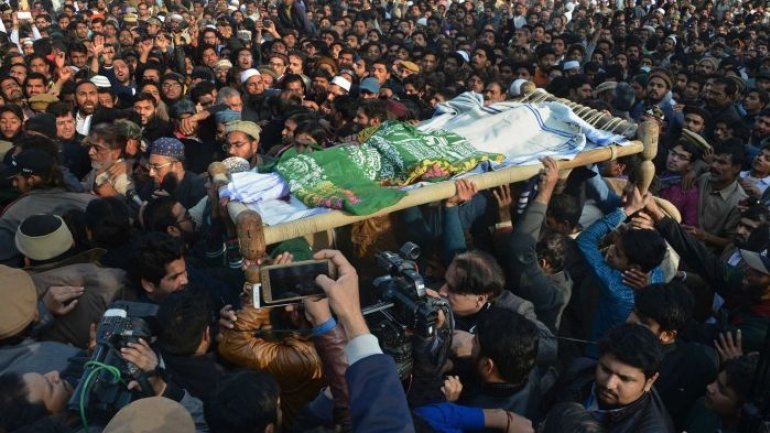 Two protesters have been killed in riots over the rape and murder of a seven-year-old girl in Pakistan, as public anger intensifies over a failure to stem a spate of abductions and killings.

The body of Zainab Ansari was found in a garbage bin on Tuesday, four days after she was abducted from her home in Kasur district, wrote abc.net.au

It was the twelfth case of a girl being abducted, raped and killed in the past year in the district, police said.

The community has been furious at the authorities for what they see as a failure to investigate such cases.

Protests sparked by her death turned violent with a mob throwing stones and some shooting bullets at a local police office.

Police said they resorted to firing into the air in an effort to quell the violence. Officials said at least two people were killed.

Zainab's parents, who were out of the country on a pilgrimage when their daughter was kidnapped, returned home on Wednesday.

Police investigators have released CCTV footage of Zainab walking in the street holding an unidentified man's hand as well as a sketch of a man wanted over the killing.

But Zainab's father Ameen has appealed for the authorities to do more.

"We are going to try and not bury our child until the issue has been properly resolved," he said.

"We are going to appeal to the Chief Justice of Pakistan, to the army chief of Pakistan, and everyone that has daughters.

"Over the last four or five days we mounted a search operation to try and find her," he said.

"All the localities of Kasur and abandoned places were searched, but unfortunately we were not able to find her. Yesterday afternoon her body was found inside the main refuse dump in the city."

Zainab's uncle Hafiz Muhammad Adnan called for calm amid the protests and said police should catch the murderer alive.

"Just to lift the burden off themselves, the authorities shouldn't kill some innocent person and say, 'Yes, we have given you justice'," he said.

"We want the killer alive. And moreover, security should be improved in the area, security cameras need to be installed."

Zainab's case has attracted the attention of the country's civilian and military leadership, with Punjab Chief Minister Shahbaz Sharif calling for immediate action.

The inspector-general of police has been asked to submit a report on Zainab's murder to the court in Punjab.

The army chief has also demanded more resources be assigned to the case, to find those responsible.

Zainab's killing has prompted Pakistani celebrities and sportsmen to use social media to pressure authorities to address violence against girls.