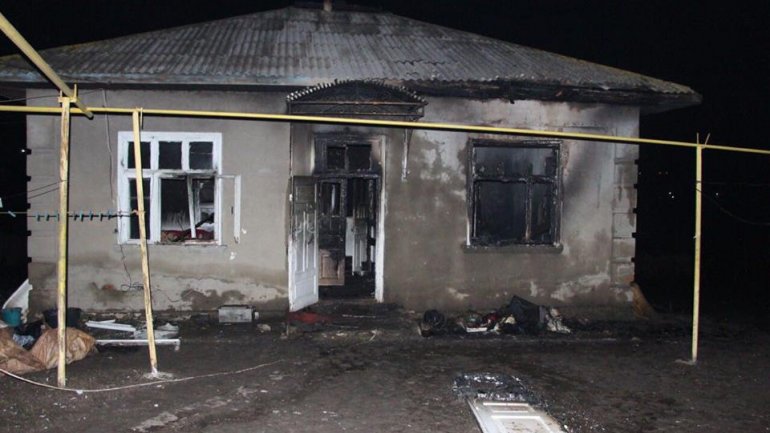 Two minors, of 13 and 15 years old, passed away this night, after a fire burst in a house from Nihoreni, Rîșcani district.

According to representatives from General Inspectorate for Emergency Situations, firefighters were called in at 04:55.

"901 service was appealed at 4:55 am. A firemen team went to the place of the incident immediately. The firemen established that a room burns. While extinguishing the fire, the firemen found the bodies of two minors", said Andrei Adam, press officer of the Balti Emergency Inspectorate.

Once on site, firefighters have established that the flames destroyed a building of 15 square meters. Within the room being found remains of two girls.

"Flame heat burning of 15 percent in the region of the neck, buttocks and cervical region. Also a CO2 intoxication.

The neighbors are shocked about what happened.

"They were playing computer games and fell asleep. Then, the fire started. Their father tried to open the doors, but the flames burned his hands."

"They are a good family. It is a pity they couldn't save the children."

"It was like a fire cracker exploded. I have heard it at four am."

From the preliminary information it was established that the victims had an electric stove plugged in, which most likely was the cause of fire.

The children's parents were unharmed, as they were sleeping in another building, which the flames have not reached.

The father was interrogated and the police opened a penal case for killing from imprudence.

"There were made made the forensic expertise, the toxicological expertise, respectively, was referred to the Directorate of Emergency Situations for receiving the report", said Alexandru Bejenaru, the chief of the Penal Search direction of Rascani.

Local authorities said that if the two spouses are not hosted by their relatives, then they will be sheltered in a placement center in Râşcani. In the future, the family will be helped to repair their home.

"We can not compensate the loss they have, but our support will be the only one. We will support the family in the course of time to repair the home." The first is to organize, to support them to fulfill their Christian duty to bury children, "writes Galina Zamurdac, vice-president of Râşcani district.

All circumstances and the source of fire have yet to be established.