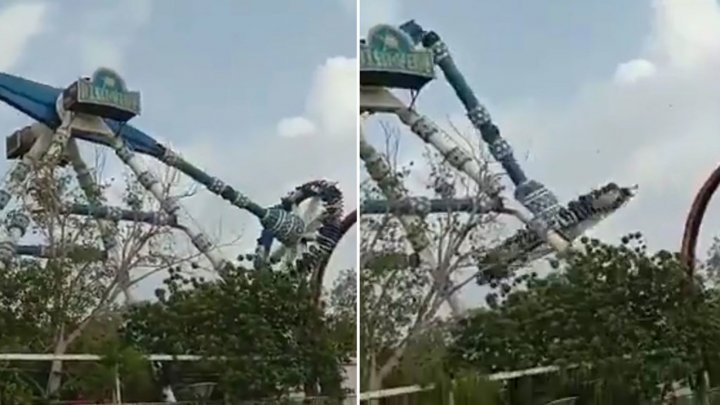 Two people died and 27 were injured when an amusement park ride snapped in half as it swung up into the air.

Video footage captured the moment the pendulum-style attraction collapsed while 31 passengers were on board, writes Independent.

The film shows the main shaft on the “Discovery” ride broke, sending the ring of seats at the bottom crashing to the ground.

Other clips on social media showed visitors trying to free people left trapped in their seats at the Kankaria Adventure Park in Ahmedabad in Gujarat, India.

Police launched an investigation after the accident on Sunday. NDTV reported that six people have been charged with culpable homicide.

They include the managing director of the Super Star Amusement, a manager and two ride operators.

Ahmedabad municipal commissioner Vijay Nehra said he had instructed officials to determine the cause of the accident.

“We need to fix accountability for such horrific accidents,” he said. “Sincere condolences for the families of the deceased. Also praying for early recovery of those injured.”

One of those who died in the accident was identified as Manali Rajwadi, 23. Her father Vimal Rajwadi told the Indian Express: “It is a shock for us to lose our daughter in such a manner. She was a fun loving and ever smiling and happy girl.

“This accident is a reminder that parks like these should not be handed over to irresponsible managers.”

Police commissioner Vipul Aggarwal tweeted: ”Whatever has happened at Kankaria today is extremely unfortunate but I assure you that the entire administrative apparatus is committed to ensure those guilty are given the maximum punishment and best possible treatment is given to injured for their prompt recovery.”