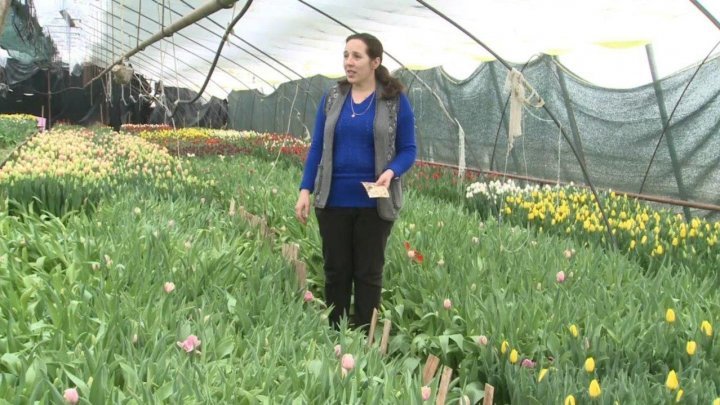 Natalia Calmîş and Dorina Cheosa from Străşeni district, in spite of being on maternity leave, manage to launch their ambitious projects in their hometown with aids provided by the United States Agency for International Development USAID.

Growing flowers in the greenhouse for years, Natalia Calmîş now affords to purchase modern watering system after obtaining the 22-thousand-lei grant. She has tulips, geranium and various types on the three-acre land. Thanks to the new brand system, the watering process only takes 15 minutes instead of six hours like before.

"The irrigation system will be used from April to May for ornamental plants", said Natalia Calmîş.

Meanwhile, with 29-thousand-lei grant, Dorina Cheosa opted to set up a Youth Development Center as a platform where the local young people can come and discuss their own projects and implement them in their own village.

"They can learn entrepreneurial ideas, learn successful ideas. In January, the young people initiated to support the local elders, we carried out a campaign to offer alimentary products. They visited some companies and the story touched the diaspora community and local residents. They managed eventually to collect 3000 lei to purchase products", Dorina Cheosa retold her inspirational story.

The young people said they found opportunities to run their own projects after attending the meetings in this center twice a week with lessons. Two groups have been found up to now, but another will be formed if more young Moldovans want to join.

USAID Moldova has financed 32 projects since 2016. The beneficiaries invested the money to purchase equipment, agricultural and non-agricultural equipment, bought raw materials for garments, installed electricity generation systems from alternative sources. They also set up tourist destinations and playgrounds for children.