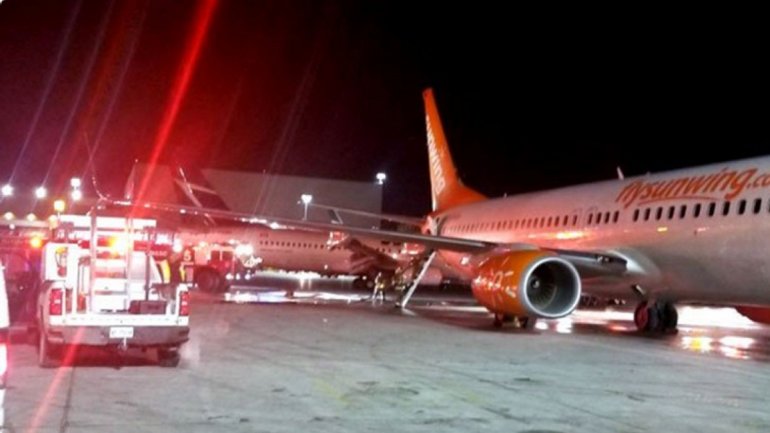 A Sunwing Airlines aircraft backed out while being towed, striking a WestJet aircraft that had arrived from Cancun and was waiting to proceed to a gate, officials said.
There were 168 passengers and six crew members aboard the arriving airplane, according to Lauren Stewart, a WestJet spokeswoman.
There were no passengers or crew members aboard the Sunwing Airlines aircraft, the airline tweeted. The aircraft was being towed by a "ground handling service provider," the airline tweeted.
Fire trucks and ambulances descended on the tarmac when a small fire on the Sunwing aircraft began, said Beverly MacDonald, a spokeswoman with the Greater Toronto Airports Authority.
Video footage shows the passengers exiting an aircraft on an emergency slide as flames rose from the tail of the other airplane.
While no passengers were injured, a member of the airport's fire and emergency services was taken to the hospital, CNN affiliate CTV Network reported.
Adriana Lobo, who was traveling with her children aboard the WestJet plane, said passengers were initially unsure of what had happened until they were evacuated.
"When you see all the fire and the smoke and everybody standing, people didn't know what to do," she told CTV Network.
AFLĂ imediat Știrile Publika.MD. Intră pe Telegram