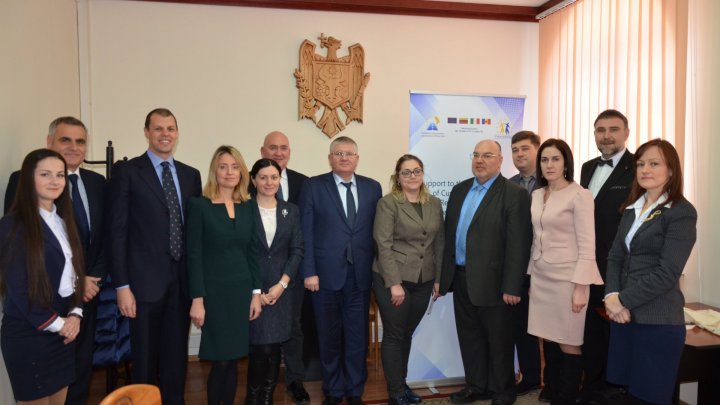 The results of the Twinning Project "Support the modernization of Customs Service of the Republic of Moldova in accordance with Association Agreement requirement" were analyzed yesterday, within the first meeting of the Board of Directors.

The reunion was attended by Deputy Director, Iurie Ceban, Head of Twinning Project representing Customs Service, Deputy Director General, Vytenis Alisauskas, Head of the Project representing Customs of the Republic of Lithuania, Project Managed of the Delegation of the European Union to the Republic of Moldova, Speranța Olaru, EU High-Level Advisers for Customs, Rosario de Blasio, as well as other representatives of this project.

The main subjects on the agenda were presenting and approving the quarterly report of the mission's activity, approving the members of the Board of Directors, as well as creating the program for the next session.

According to the report presented by Valdas Dovydenas, Resident Counselor of Twinning, the project's implementation begun by examining all legislative and normative acts in force, regulating the Customs activity.

Reviewing the legal framework will allow to those responsible for the project to draw up recommendations, based on best practices from European Union, so that later, they will be taken into accounts in the process of harmonizing Customs legislation on the chapter of Common Transit Procedure and Single Window.

Within the reunion, the plan for January - June 2018 was also approved. At the end of which, responsible will write a report regarding the registered progresses.

At the same time, in order to ensure a more efficient monitoring of the actions taken within the project, parties have set up a graphic where meetings will take place at each three months.

Participants have appreciated the cooperation of all parties and expressed their trust in the dialogue and meeting all deadlines for a successful implementation of the project.

Twinning Project "Support the modernization of Customs Service of the Republic of Moldova in accordance with Association Agreement requirement" was launched on November 21 2017.

Within this project, Customs Services are supported by European experts in the implementation of the Single Window and New Computerised Transit System (NCTS), conditions foreseen within the Deep and Comprehensive Free Trade Areas (DCFTA) chapter of the Association Agreement.

With a budget of 1 million euro, the project is expected to last for two years and is implemented with European Union's financial support.