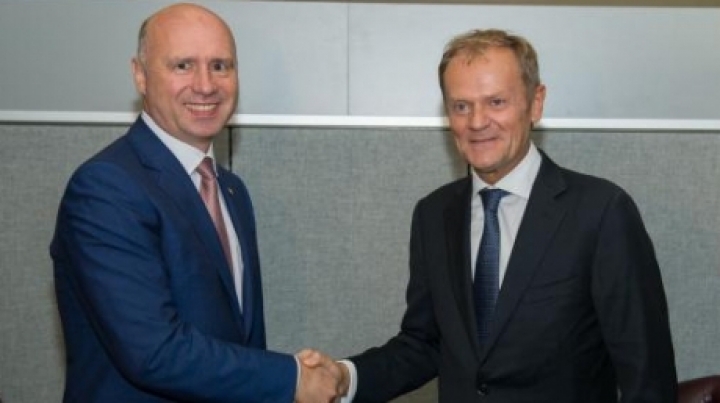 Prime Minister Pavel Filip met with the President of the European Council, Donald Tusk, within the UN General Assembly in New York. He has reiterated the European integration is Moldova’s country project and the present government will do its best to reach this objective and insure decent living to the people.

The Prime Minister has told the European official that over 90% of the provisions in the Reforms agenda roadmap have been achieved, and now all the laws passed shall be implemented.  Pavel Filip has reconfirmed the determination to carry out all the reforms necessary, even if they might be unpopular.

"I do not want a political future for myself. I assume the risk of the unfolded reforms, and I am determined to conduct all the necessary reforms to the very end, so that Moldova should be able to turn away from its European path," the Cabinet chief said.

Filip has also talked about the relations with the International Monetary Fund, which had reached a staff level agreement, as a Program is to be signed with in October.

The President of the European Council, Donald Tusk, has said signing an accord with the IMF is important both Moldova and the EU.

The European official has encouraged the Chișinău authorities to advance the reforms, including in the bank sector, to regain the trust of foreign partners and own citizens. Donald Tusk has assured the EU will back up Moldova in implementing the reforms and in carrying out its European aspirations.