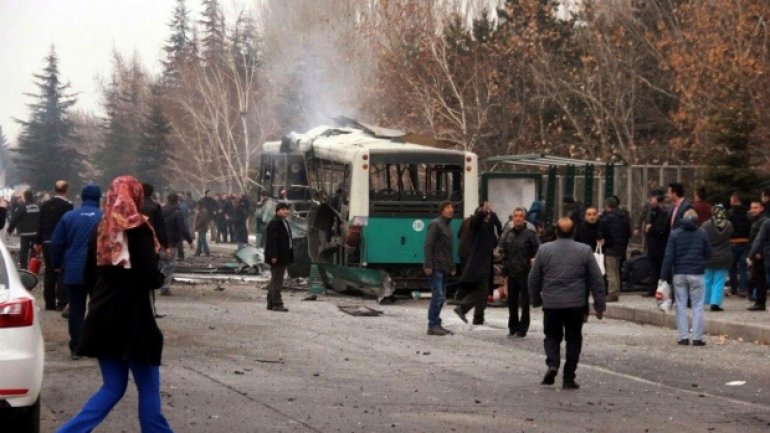 A car bomb in Turkey that killed 13 soldiers and wounded 55 other soldiers and civilians was planted by the militant Kurdistan Workers’ party (PKK), the Turkish president, Recep Tayyip Erdoğan, has claimed, informs The Guardian.

The explosion came a week after a similar attack killed more than 30 police officers. Television pictures showed the smouldering wreckage of the bus, as the wounded were taken to waiting ambulances.

After Erdoğan’s comments, nationalist protesters on Saturday ransacked the local headquarters of the pro-Kurdish Peoples’ Democratic party (HDP) in Kayseri and several other cities.

The state-run Anadolu news agency said the bomb exploded at an entrance gate to Erciyes University in Kayseri, hitting a public bus that was carrying soldiers on leave and other passengers.

The blast is likely to further anger the Turkish public after a string of deadly attacks this year, several of which have been claimed by Kurdish militants, including a twin blast last week in Istanbul that killed 44 and wounded more than 150.

There was no immediate claim of responsibility for Saturday’s attack, but the deputy prime minister, Veysi Kaynak, likened it to the twin bombings outside the stadium of the Istanbul soccer team Beşiktaş last week.