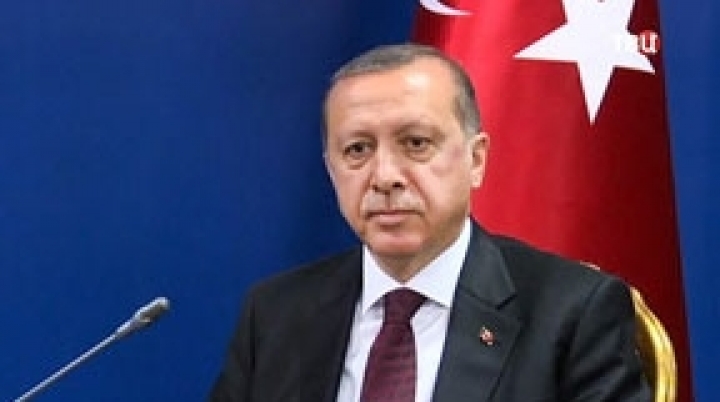 President of Turkey Recep Tayyip Erdogan has congratulated the leadership of Moldova and the entire Moldovan people on the occasion of the 25th anniversary of Moldova’s independence, and expressed readiness to pay an official visit to Chisinau in the nearest future. Erdogan stated this in his meeting in Ankara with Moldova's Deputy Premier, Minister of Foreign Affairs and European Integration Andrei Galbur on Tuesday.

The parties discussed the current shape and perspectives of bilateral relationship development and highlighted favorable prerequisites for raising the relations to the level of a strategic partnership.

The interlocutors voiced confidence that the soon-to-be coming into effect of the bilateral Agreement on free trade should promote the growth of bilateral trade between Moldova and Turkey.

Andrei Galbur thanked the Turkish side for the valuable assistance Ankara has been rendering to Moldova throughout all the years of its independence. He said that the official Chisinau had condemned the military coup attempt undertaken in Turkey last July, is expressing solidarity with the incumbent democratically elected leadership of Turkey, and expresses condolences over the recent terror acts in that country.

Meeting with the Speaker of the Great National Assembly of Turkey, Ismail Kahraman, the Moldovan foreign minister welcomed the ratification by two parliaments of the Free Trade Agreement, which he stressed has an enormous significance for deepening of Moldova-Turkey economic relations.

Galbur met also with Turkey Prime Minister Binali Yildirim and expressed gratitude for support to Moldova as a whole and to Gagauzia in particular. This assistance is conducted by means of the Turkish International Cooperation and Development Agency (TIKA) in the form of various projects realized here in the spheres of economy, education, agriculture, infrastructure development, in the humanitarian sector and tourism.

Binali Yildirim said he had accepted the invitation made to him by Moldovan Prime Minister Pavel Filip to visit the Republic of Moldova, including Gagauzia, in the nearest future, Infotag informs.