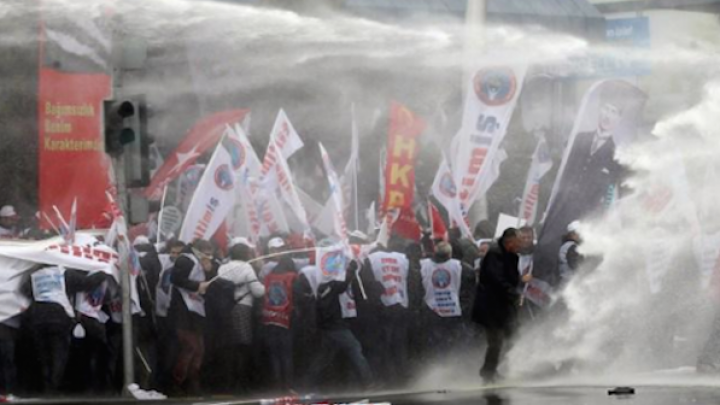 Brawls erupted and police pushed back crowds chanting "shoulder to shoulder against fascism" after Turkish authorities suspended more than 11,000 teachers on Thursday over alleged links with the Kurdish militants.

A further 418 teachers were also suspended from duty in the predominantly Kurdish eastern province of Tunceli on Friday. Several hundred teachers gathered in front of the education ministry's provincial building to protest.

"This is an attack on our unionized struggle," Suleyman Guler, the provincial head of the education union, Egitim-Sen, told Reuters. Guler was also suspended from work.

"It is not possible to accept this decision. There is neither a crime here nor a criminal. We call for the immediate halt of this move," he said.

The suspensions were part of the government's campaign against the Kurdistan Workers Party (PKK) in the mainly Kurdish southeast. It comes as Ankara also pushes ahead with a purge of tens of thousands of supporters of U.S.-based Muslim cleric Fethullah Gulen, who Turkey accuses of orchestrating an attempted coup in July. Gulen denies any involvement.

The scope of that crackdown has raised concern among rights groups and Turkey's Western allies, who fear President Tayyip Erdogan is using the failed coup as pretext to curtail dissent.