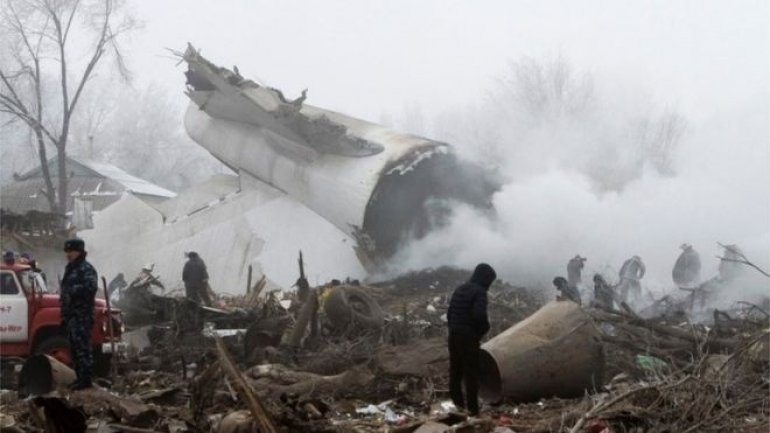 A Turkish cargo plane from Hong Kong has crashed in Kyrgyzstan, killing at least 32 people, most of them on the ground, say officials.

The Boeing 747 crashed into homes near Manas airport, about 25km (15 miles) north of the capital, Bishkek, the Kyrgyz government said.

Flight TK6491 was making a stopover in Manas en route to Istanbul in Turkey.

The plane belonged to Turkish cargo carrier ACT, which flies under the name MyCargo. But the Kyrgyz government said the flight itself was on behalf of Turkish Airlines.

Turkish Airlines distanced itself from the incident.

"Our condolences to the families of those who have lost their lives in the tragic incident involving an ACT Airlines aircraft in Kyrgyzstan," it wrote on Twitter.

The plane came down shortly after 07:30 local time (01:30 GMT) in the village of Dacha-Suu, a popular holiday home area.

Visibility was poor at the time because of freezing fog, but the cause of the crash has not yet been confirmed. The plane is believed to have been around 14 years old.