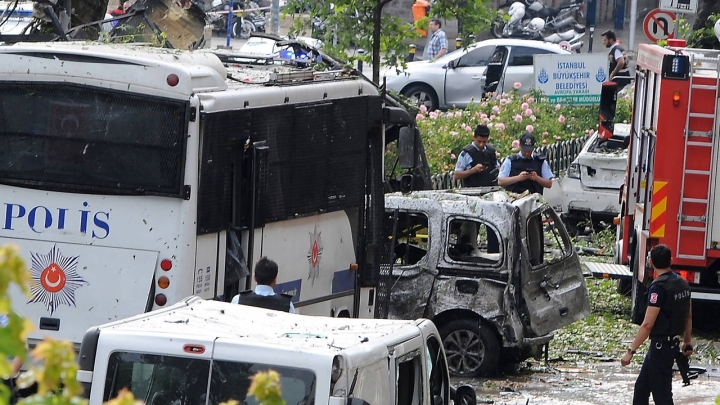 Turkish officials said Kurdish insurgents carried out car bombings over the last two days that killed at least 14 people in Istanbul and the country’s southeast, and vowed to press ahead with an “uncompromising” war on terrorism, according to Wall Street Journal.

Following Tuesday’s strike on security forces in central Istanbul, the outlawed Kurdistan Workers’ Party, or PKK, attacked police headquarters in the Midyat district of Mardin on the Syrian border, a Turkish official in Ankara said.

At least one policeman and two civilians were killed in the Mardin blast, Turkish Prime Minister Binali Yildirim said in televised remarks from Istanbul, where he was visiting about three dozen people wounded in the Tuesday attack. Around another 30 people were wounded in the Mardin bombing, which took place about 26 hours after a similar assault in Istanbul killed five policeman and six civilians.

Websites affiliated with the PKK and its offshoots, where Kurdish militants often claim attacks, didn't have any statements on the bombings in Istanbul and Mardin. A spokesman for the PKK’s umbrella political group didn’t respond to a request for comment.

The PKK has been increasingly targeting Turkish security forces in predominantly civilian, urban areas as the government expands its military and political campaign against Kurdish separatists.

On Wednesday, a constitutional amendment went into effect, stripping 50 Kurdish lawmakers of immunity and paving the way for them to face terrorism-related charges for supporting the PKK. President Recep Tayyip Erdogan, long an advocate of the measure, on Tuesday evening approved the bill passed by parliament May 20.

The pro-Kurdish Peoples’ Democracy Party, or HDP, said Wednesday that it would appeal the move to the European Court of Human Rights, charging Mr. Erdogan with clamping down on its politicians as part of an effort to consolidate executive powers in the presidency.

Kurdish lawmakers’ political and legal battle for survival comes as the resurgent conflict between the PKK and Turkish security forces approaches its first anniversary.

Thousands of people have been killed and some 200,000 displaced from their homes in the predominantly Kurdish southeast Turkey since three-year-old peace talks collapsed last July. The PKK, which is listed as a terrorist organization by Ankara and its North Atlantic Treaty Organization allies, has been fighting for autonomy in southeast Turkey since 1984 in a conflict that has killed more than 40,000 people.

Turkish jets carried out strikes on PKK targets in the southeastern province of Diyarbakir midday Tuesday and hit overnight the Qandil Mountains of northern Iraq, where the Kurdish militants have their headquarters and camps.

Mr. Erdogan said Tuesday evening that 7,600 PKK militants have been killed since the conflict flared up last July. Rights groups monitoring the fighting put the PKK losses in hundreds, while official and nongovernmental groups say some 500 Turkish security forces and hundreds of civilians have also been killed in that time frame.

Turkish officials said the Kurdistan Workers’ Party, or PKK, was responsible for recent attacks. A subheading in an earlier version of this article incorrectly referred to the PKK as the PPK.