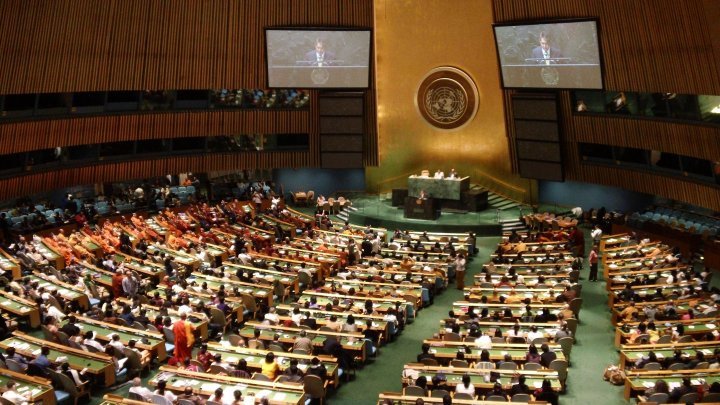 The draft resolution, proposed by the Republic of Moldova, on the withdrawal of Russian troops from the Transnistrian region will be debated at the UN General Assembly on 22 June. This was after the authorities in Chisinau re-registered with the UN Secretariat the application for examination of the project and this was accepted. This was announced by the Minister of Foreign Affairs and European Integration, Tudor Ulianovschi, in a press briefing.

"Last year, the Moldovan diplomacy undertook a series of actions aimed at adopting within the UN some pertinent decisions aimed at the complete withdrawal of the foreign military forces from the territory of the Republic of Moldova. This initiative was formulated by the Prime Minister of the Republic of Moldova Pavel Filip in a speech by the United Nations General Assembly on September 22, 2017.

In this context, there have been public hearings and some critical comments on the Government that it has changed its position by revoking its UN initiative. Further developments in this process as well as the measures taken by Moldovan diplomacy have shown that our tactics were correct and effective.

In this briefing, I want to announce that the government has not abandoned its initiative. Recently, the United Nations Secretariat has registered the draft resolution submitted by the Republic of Moldova, entitled The complete and unconditional withdrawal of foreign military forces on the territory of the Republic of Moldova.

For the time being, efforts are being made to ensure the widest possible support of the UN member states. We already have 10 states that co-authored the draft resolution.

This draft resolution will be examined on June 22, 2018 at the UN General Assembly session," Ulianovschi said.

It is important to note that the Moldovan authorities instituted the unconditional and complete withdrawal of the operative group of the Russian troops by their illegal stay on the territory of the Republic of Moldova, but not the rotating contiguous part of the military component of the Unified Control Commission deployed in eastern districts of the Republic of Moldova under the provisions of the Moldovan-Russian cease-fire agreement of July 21, 1992, "the Foreign Ministry said.

"Taking a retrospective look at the evolution of the history of this issue, you will easily notice that the Moldovan authorities consistently and consistently pleaded for the withdrawal of the Russian Federation's military formations from its territory, a reminiscent of the former 14th Army, reorganized in July 1995 in the so-called operative group of Russian troops, illegally deployed in the Transnistrian region of the Republic of Moldova.

In this context, I shall invoke the multiple, transparent steps of the Moldovan authorities formulated from the tribune of the highest international forums, in particular the UN and the OSCE, as well as in the political dialogue with the Russian Federation, on the military activities carried out by the Task Force especially the joint organization with the alleged Transnistrian forces structure of the numerous military applications, including the simulation of the Dniester River.

This is a flagrant violation of the Moldovan-Russian ceasefire agreement of July 21, 1992, according to which Russian military forces have committed themselves to strict compliance with the principle of neutrality in relation to the conflicting parties " said Minister Tudor Ulianovschi.

"It is obvious that such behavior can be perceived only as a direct threat to the security of the Republic of Moldova and as a defiance of its sovereignty and territorial integrity, including the constitutional provisions on the status of neutrality and the dislocation of forces in its territory foreign military.

In the context of the perpetuation of the crisis in Ukraine, the intensification of the military activities of the Russian troops and of the Transnistrian forces structure contributes to increasing tensions in this region of Europe.

The issue of the withdrawal of Russian troops from the territory of the Republic of Moldova has been repeatedly addressed within the OSCE since 1992, particularly at ministerial meetings and OSCE summits, which is reflected in the Transnistrian conflict issue in relevant documents organizations.

In this context, I shall invoke, in particular, the political declaration of the Budapest OSCE Summit in December 1994, the statement of the Istanbul OSCE summit in November 1999 and the final act of the Conference of States Parties to the Treaty on Conventional Armed Forces in Europe the day after the OSCE Summit in Istanbul, as well as the political statement of the OSCE Ministerial Meeting in Porto in 2002.

I will note that the Russian Federation withdrew part of the army, military technical and ammunition up to 2003, which has shown that this is possible. However, it did not fulfill its bilateral commitments and the OSCE's obligation to withdraw the entire Russian troop.

Thus, in the Transnistrian region there is still an illegal presence of the Russian Federation in the person of the 1,500-1,700 soldiers who constitute the so-called operatic group, and about 21,000 tons of ammunition stored in the Cobasna deposits, the exact figures are known only to the Russian authorities, given that this territory is temporarily outside the constitutional control of the Republic of Moldova, as well as the total lack of transparency in this respect.

As a result of negotiations lasting more than two years, an agreement on the legal status, mode and timing of the gradual withdrawal of these Russian military formations was signed on October 21, 1994 in Moscow. Regretfully, the agreement remained a dead letter because of the Russian side's refusal to put it into force.

Thus, the examination of the draft resolution proposed by the Republic of Moldova at the UN for the first time since its independence will be an imported exercise by the UN of preventive diplomacy in relation to a member state and a region where peace and security are undermined by the lack of dialogue and non-compliance with the fundamental principles of international law, "said Foreign Minister and European Integration Minister Tudor Ulianovschi.

In this context, political analyst Corneliu Ciurea claims that even if the resolution will be supported by the UN, the Russian Federation will refuse to withdraw its troops from the territory of the Republic of Moldova:

"Russia will expose its views on the fact that it is counter to take the militants from the Transnistrian region. The resolution will not have effect even if it will be voted out of the positions of Russia and Tiraspol. We must be realistic if the resolution , then Russia will not take its military troops, but for us the resolution is important as support from the UN, "said political analyst Corneliu Ciurea.

And the Colonel in Reserve, Alexandru Popescu, is of the opinion that the Chisinau authorities must maintain their position in order to bring stability in the country.

"We have to go with certain steps, even if Russia wants to maintain its position in the Transnistrian region. The resolution is important for us, it will bring stability," said SIS Colonel in reserve, Alexandru Popescu.

We remind that on Thursday, at the meeting of the Joint Control Commission, Chisinau mentioned that three armored columns belonging to the Operative Group of the Russian Troops were observed on the Tiraspol - Râbniţa highway.

Moreover, they were accompanied by special cars of the so-called police in the separatist region.

At the request of Chisinau, Tiraspol mentioned that the military technique is in the places of permanent dislocation and does not circulate through the security zone.

Russia's representatives in the Joint Control Commission said they would be informed of this case.

PUBLIKA.MD reminds that according to the Declaration of the Organization for Security and Cooperation in Europe, adopted in 1999, Russia pledged to withdraw its army from the territory of Moldova until the end of 2002. This has not happened.

Russian troops reached the left bank of the Dniester River in 1992.

They also guard the military depots in the Transnistrian region, where over 20,000 tons of ammunition are preserved.

Their removal from the territory of the left bank of Nistru started in 2001, but was interrupted by the Transnistrian side due to tensions with Chisinau.