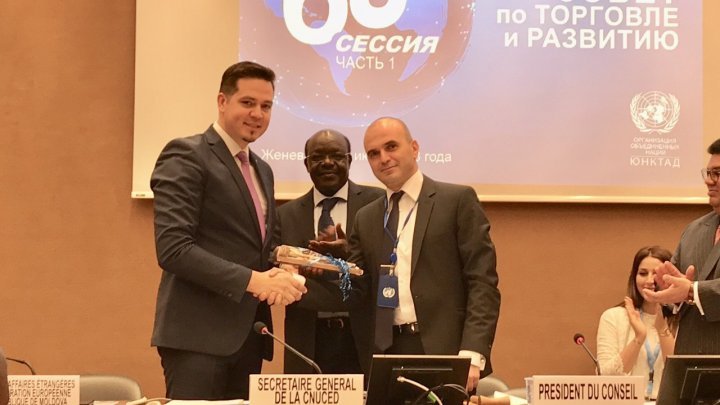 Minister of Foreign Affairs and European Integration, Tudor Ulianovschi, in his capacity as Chairman of the UNCTAD Trade and Development Council, presented at the 65th meeting of this international economic organization in Geneva, the Annual Activity Report and institutional policies to revitalize UNCTAD's work worldwide.

Recognizing the work of UNCTAD during 2017-2018, Minister Tudor Ulianovschi mentioned the need to revive assistance programs provided by United Nations specialized agencies in the development of global trade policies and to increase the visibility of this UN agency, specialized in the global economic field .

Assessing the work of the UNCTAD Trade and Development Council under the chairmanship of the head of Moldovan diplomacy, UNCTAD Secretary General Mukhisa Kituyi mentioned the dynamism of its work, notably in achieving the UN Sustainable Development Objectives and imposing a roadmap for the implantation of the UN agenda 2030.

"During the years 2017-2018, UNCTAD increased its visibility due to the actions and ideas promoted by Minister Ulianovschi, both in New York and in the capitals of UN member states, "said the UNCTAD Secretary-General.

Minister Ulianovschi presented the experience of the Republic of Moldova in the consolidation of small and medium-sized enterprises (SMEs), the implementation of the Asycuda program for the de-bureaucratization of customs operations and the facilitation of trade, expressing thanks to the specialized agencies of the UN and the member states for the technical and financial assistance provided to our country in the implementation process 17 UN Sustainable Development Goals.

Lebanon's ambassador to the UN, Salim Baddoura was elected as the new chairman of the UNCTAD Trade and Development Council, at the proposal of the regional group of countries Asia and Pacific.

At the meeting, Minister Tudor Ulianovschi had a working meeting with EU Trade Commissioner Cecilia Malstrom.