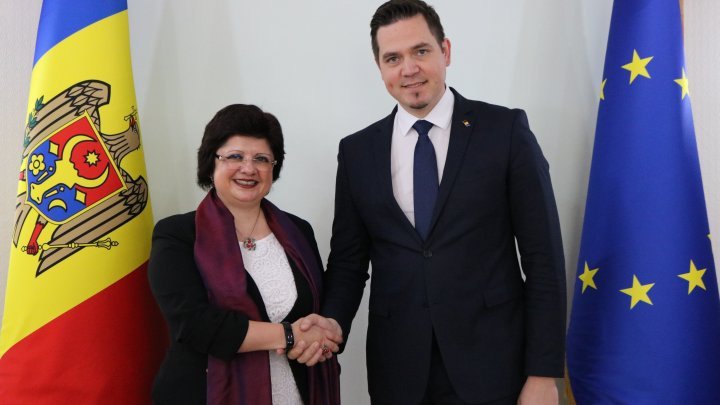 Francophonie gives us an extraordinary opportunity to promote the Republic of Moldova among the Francophone countries, direct exchange of information and ideas in an increasingly mobile world, representing an extraordinary instrument of public and cultural diplomacy. The statement was made today by the Minister of Foreign Affairs and European Integration, Tudor Ulianovschi, during a meeting with Dr. Rennie Yotova, Director of the Regional Office for Central and Eastern Europe (BRECO) of the International Organization of Francophonie (OIF).

In this context, the head of Moldovan diplomacy mentioned that a series of activities at national and sectoral level have already been organized within the framework of the Francophony Year 2018, aiming at promoting the solidarity of the Francophone States and their joint action on several dimensions, including politics, economic and cultural, reflecting, at the same time, the new dynamism of the International Organization of Francophonie.

Minister Ulianovschi also pointed out that his institution is working on a new program of actions in the Francophonie, which will allow more efficient use of the opportunities provided by OIF member states, the initiation of new cultural, educational, other gender in the Republic of Moldova.

According to the head of Moldovan diplomacy, today's launch of the international exhibition of Francophone sculptors from the Republic of Moldova, Finland and Romania Unity in Light and Diversity in Colors and Forms is a first step in the process of revising and applying in practice the cooperation of the country with the International Organization of Francophonie.

In turn, Rennie Yotova appreciated the performance of the Republic of Moldova in the OIF, including through active participation in various activities organized both at regional and world level, mentioning that the Francophonie is thus an instrument that can underpin future developments positive from both national and European perspective.

In this context, the BRECO Director reiterated the institution's willingness to organize training courses for young diplomats within the MFAEI, offering them the possibility of professional growth both on the diplomatic segment and other areas necessary for the activity in the system.

In the dialogue, Tudor Ulianovschi and Rennie Yotova exchanged views on the possibilities of expanding bilateral cooperation, initiating joint projects, including the issues to be discussed at the 17th Francophonie Summit, which will took place in October 2018 in Armenia.