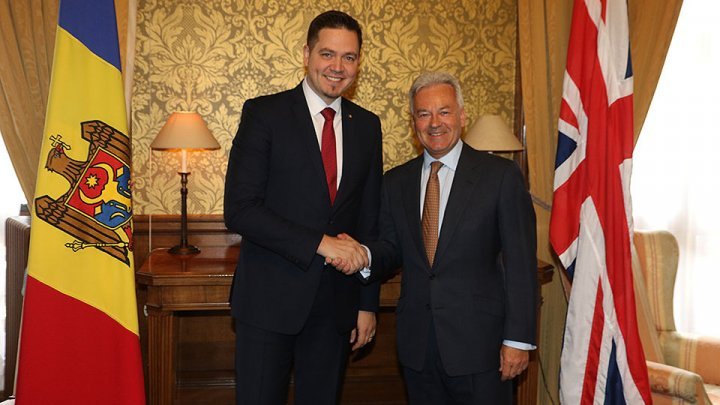 The establishment of a further consistent political dialogue between the Republic of Moldova and the United Kingdom of Great Britain and Ireland, the commercial-economic intensification and other relations, as well as the visa issue for the Moldovan citizens were the basic topics of the discussions of the Minister of Foreign Affairs and European Integration , Tudor Ulianovschi, with British State Secretary Sir Alan Duncan.

In the framework of the dialogue, Minister Tudor Ulianovschi mentioned that the Moldovan-British relations in recent years have registered a positive trend of development, with the support of the authorities in London, several important projects in various social, economic, educational, security and defense in the Republic of Moldova.

In this context, the head of Moldovan diplomacy stressed that the Government of the Republic of Moldova is interested in deepening bilateral relations with the UK authorities, establishing a more consistent strategic dialogue on all dimensions with clear accents, especially after Brexit, for each component.

In the context, the parties discussed the future bilateral legal framework, which will regulate the Moldovan-British relations on all dimensions resulting from the new architecture that will be created after Brexit.

Tudor Ulianovschi and Alan Duncan also discussed the issue of facilitating the visa regime for Moldovan citizens, especially considering their number in the United Kingdom and their positive role in developing bilateral relations and inter-human contacts.

Sir Alan Duncan appreciated the position of the Republic of Moldova and the support expressed to the London authorities in the case of the Salisbury attack, noting that the Government of Chisinau demonstrated solidarity and gave a clear signal to the international community.

The British official expressed the unconditional support of the territorial integrity of the Republic of Moldova and the efforts of the authorities in Chisinau in the political settlement of the Transnistrian conflict. The interlocutors also agreed on continuing cooperation and mutual support in various international forums and organizations.